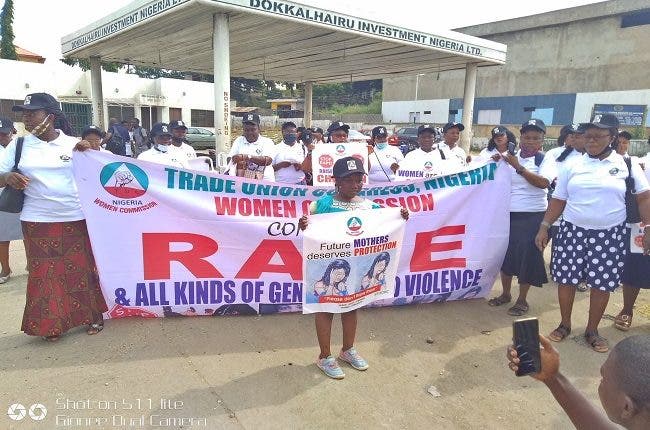 Women Commission of the Trade Union Congress (TUC), Kogi State chapter, has appealed to the federal government to enact a law that will put rapists in jail for thirty years.

The chairperson of the union, Mrs Margret Bose Adeika made this known on Thursday during a peaceful protest condemning rape in the country.

According to her, the high rate of rape cases in the country is alarming adding that underage girls and ladies are not safe in society.

She lamented a situation where underage girls below ten years are raped and killed after the act.

She stressed that the situation has become worrisome that some parents no longer allow their daughters to visit friends due to the situation.

“I want the federal government to take proactive action against rapists in the country. The law should not allow bail for rapists rather they should be charged to court and jailed for thirty years,” she said.

She noted that the reason why they embarked on the peaceful protest is to say no to rape, nothing that the union condemns it totally.

Comrade Adeika as called on parents to monitor the activities of their daughters at home to know the kind of friends to go out with and also the way they dress at times.

“Girls should avoid dresses that can provoke people in society but rather they should dress in a way that people will respect anytime they go out.

“In some part of the country, rape cases are very high, and we want the government at all level to take proactive actions against this deadly act so that our children particularly our girls are safe in the society,” she said.