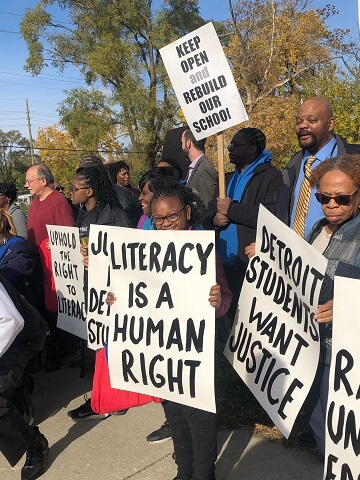 In a groundbreaking decision, a federal appeals court on Thursday recognized a fundamental federal right to a basic minimum education and access to literacy.

The 2-1 decision by a panel of the U.S. Court of Appeals for the 6th Circuit, in Cincinnati, revives a lawsuit brought on behalf of a group of Detroit schoolchildren over poor conditions in that city’s schools, which have been under varying degrees of state control in recent years.

“The recognition of a fundamental right is no small matter,” said the 6th Circuit court in Gary B. v. Whitmer. “Where, as plaintiffs allege here, a group of children is relegated to a school system that does not provide even a plausible chance to attain literacy, we hold that the Constitution provides them with a remedy.”

The majority rejected the plaintiffs’ arguments based on the 14th Amendment’s equal-protection clause and on compulsory school attendance laws. But it recognized the rights to a basic minimum education and access to literacy as part of the 14th Amendment’s guarantee of substantive due process, which is how the court has recognized rights beyond procedural due process that aren’t mentioned in the Constitution, such as the right to privacy and bodily integrity.

“Plaintiffs contend that access to literary, as opposed to other educational achievements, is a gateway milestone, one that unlocks the basic exercise of other fundamental rights, including the possibility of political participation,” said the court. “While the [U.S.] Supreme Court has repeatedly discussed this issue, it has never decided it, and the question of whether such a right exists remains open today.”

The majority opinion by U.S. Circuit Judge Eric L. Clay, joined by Judge Jane Branstetter Stranch, meticulously went through Supreme Court decisions on fundamental parental rights to oversee the education and upbringing of their children, its rulings rejecting a fundamental right to education and holding that a state could not deny public education to immigrant children, and the historical significance of race in U.S. education.

In particular, the 6th circuit distinguished the right to basic minimum education it was recognizing from the Supreme Court’s decision in San Antonio Independent School District v. Rodriguez, the 1973 decision about inequities in the Texas education system, which held there was no fundamental right to education.

The 6th Circuit asserts that in San Antonio, the Supreme Court “never ruled on the right to … a basic minimum education, and as shown more explicitly in its later cases, saved the question for another day.”

The 6th Circuit ruling goes on to argue that the Supreme Court’s 1982 decision in Plyler v. Doe, which barred Texas from keeping immigrant students out of its schools, reiterated the holding of Rodriguez that education is not a fundamental individual right in the Constitution, but still stressed that education has a role as a “social equalizer.”

“After employing the reasoning of these Supreme Court cases and applying the court’s substantive due process framework, we recognize that the Constitution provides a fundamental right to a basic minimum education,” the 6th Circuit court panel held.

The right is “narrow in scope,” the court said,  guaranteeing only the education needed “to provide access to skills that are essential for the basic exercise of other fundamental rights and liberties, most importantly participation in our political system.”

The majority drew a sharp dissent from Judge Eric E. Murphy, who said the lawsuit alleges school conditions “that would significantly impair any child’s ability to learn,” and that if he were in the state legislature or on the local school board, “I would work diligently to investigate and remedy the serious problems that the plaintiffs assert.”

“But I do not serve in those roles,” Murphy said. “And I see nothing in the complaint that gives federal judges the power to oversee Detroit’s schools in the name of the United States Constitution. That document does not give federal courts a roving power to redress every social and economic ill.”

The Gary B. case is part of a new wave of education litigation asserting a federal right to education in various forms. In Rhode Island, there is a federal suit pending based on civics and the right to participate in citizenship. And in a case from Mississippi, a federal appeals court recently revived part of a lawsuit asserting that Mississippi’s lack of a “uniform” education system violates the 1868 federal law that readmitted the state to the Union after the Civil War.

The Gary B. lawsuit is based on extensive direct control that the state of Michigan has had over the Detroit public schools from the 1990s until recently, as well as certain state-level policy interventions that affect the city system.

The plaintiff children’s schools are five of the lowest-performing in the state, and the suit asserts that conditions in those schools are so bad—due to the absence of qualified teachers, crumbling facilities, and insufficient materials—that the schools fail to provide access to literacy.

“There is no consistent literacy instruction program in plaintiffs’ elementary schools, and the schools lack the staffing and capacity required to effectively implement such a program,” the suit says. It goes on to detail numerous alleged failings in teaching, facilities, learning materials, and educational outcomes.

A federal district judge, though sympathetic to the plaintiffs claims, held in 2018 that the Constitution does not recognize a right to literacy.

But the 6th Circuit’s decision now revives the suit.

“Beyond the abstract question of whether there is a fundamental right to a basic minimum education, plaintiffs must also have plausibly alleged that they were deprived of such an education,” the majority said. “Looking at their complaint as a whole, plaintiffs’ allegations—if proven true—would demonstrate that they have been deprived of an education
providing access to literacy.”

The court said it was premature to define the exact contours of the right it was recognizing.

“At this stage of the litigation—a motion to dismiss in which no evidence has been discovered or presented—it would be difficult to define the exact limits of what constitutes a basic minimum education sufficient to provide such access,” the court said. “This task is best suited for the district court in the first instance. But a few key principles can trace the contours of the right, providing guideposts for the parties as they continue this litigation.”

The right would seem to include three basic components, the court said: facilities, teaching, and educational materials, such as books.

“For each of these components, the quality and quantity provided must at least be sufficient for students to plausibly attain literacy within the educational system at issue,” the court said.

Carter G. Phillips, an experienced appellate litigator in Washington who argued the case on behalf of the Detroit schoolchildren, said the decision “has given hope” to his clients.

The arguments on behalf of the children advanced the idea that the Supreme Court’s San Antonio decision against a broad federal right to education had left wiggle room for a more defined right, he said.

“If you just talk about a constitutional right to education, that carries with it a fair amount of baggage,” Phillips said. “Then you might have federal courts monitoring every school system.”

The right recognized by the 6th Circuit “takes it down a few notches by talking about a fundamental right of access to literacy,” he said.

Justin Driver, a Yale Law School professor who wrote a book about the Supreme Court’s education cases involving students, called the 6th Circuit’s ruling “the most momentous circuit court decision in the field of education in decades.”

The majority opinion was “thoughtful, compelling, and careful,” Driver said. “It was a bold litigation strategy by the plaintiffs to say their claim belonged in the federal courts. Their boldness was rewarded, at least for the time being.”

The Michigan attorney general’s office had defended against the lawsuit, chiefly by arguing that the state was no longer the proper defendant because control of the Detroit schools had been returned to the school district. (The 6th Circuit panel was unanimous in rejecting that argument.)

But on Wednesday, Michigan Attorney General Dana Nessel, a Democrat who took office in 2019, after the lawsuit had been underway, praised the 6th Circuit’s decision.

“I am overjoyed with the court’s decision recognizing that the Constitution guarantees a right to a basic minimum education,” Nessel said in a statement. “This recognition is the only way to guarantee that students who are required to attend school will actually have a teacher, adequate educational materials, and a physical environment that does not subject them to filth, unsafe drinking water, and physical danger.”

Nessel had tried to file a friend-of-the-court brief in the case supporting the schoolchildren, which the 6th Circuit rejected because it was in conflict with the role of lawyers in her office who were defending against the suit.

A spokeswoman for Michigan Gov. Gretchen Whitmer, a Democrat who succeeded Republican Gov. Gary Snyder and thus replaced him as the lead defendant, told The Detroit News that Whitmer had supported the argument that the state was not a proper defendant in the case, but that the governor believed that the state had a responsibility to teach every child to read. TikTok Is Sued by State of Indiana, Accused of Targeting Young Teens With Adult Content