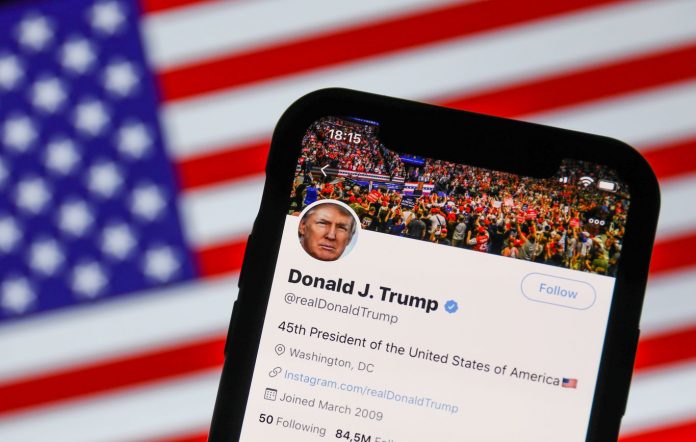 Acting Solicitor General Jeffrey Wall asked the justices in a filing on Thursday to review a judgment by the U.S. Court of Appeals for the Second Circuit that found Trump’s use of @realDonaldTrump to tweet official White House business means he can’t exclude people because they criticize him and his policies.

Doing so violates the First Amendment’s ban on viewpoint discrimination, the court said.

The Justice Department said the ruling would “jeopardize the ability of public officials—from the President of the United States to a village councilperson—to insulate their social-media accounts from harassment, trolling, or hate speech.”

Its petition notes that followers can still see the president’s tweet, but can’t retweet or interact with them.

The appeal also comes as the president is facing a new suit seeking to enforce the Second Circuit’s ruling, saying that Trump continues to block certain followers despite the order.

Trump’s personal account was created in 2009 when he was a private citizen. The White House administers two government-owned accounts—@POTUS and @White House—from which his critics aren’t banned.

In 2017, however, the president blocked seven followers of his personal account who were critical of his administration. They sued.

The Justice Department agrees the president sometimes uses his personal account to announce official policies. The Second Circuit noted that he used it to announce the nomination of Christopher Wray as FBI director, the ban on military service for transgender soldiers, the firing of Chief of Staff Reince Priebus and his replacement with retired Gen. John Kelly, as well as his discussions with North Korean leader Kim Jong Un on its nuclear program.

But the Justice Department argues that his decision to block individuals is a personal, not an official, one.

The Second Circuit’s decision ignores “the critical distinction between the President’s (sometimes) official statements on Twitter and his always personal decision to block respondents from his own account,” according to the DOJ.

A response is due Sept. 21, meaning that the justices could decide whether to take up the case shortly after returning for the next term, which starts in October.

To contact the reporter on this story: Kimberly Strawbridge Robinson in Washington at krobinson@bloomberglaw.com

US to Resume Federal Executions After 17 Years

Lawyer Sets Himself on Fire in Environmental Protest