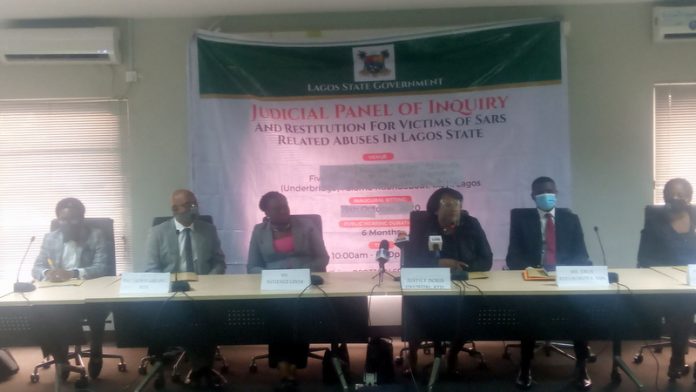 Lagos— No fewer than 15 ENDSARS protesters, Friday, came to protest at the Lagos State Court of Arbitration and Mediation in Lekki, venue of Lagos State Judicial Panel of Enquiry and Restitution for Victims of SARS-related abuses and other matters, saying they suffered gunshot wounds during the #EndSARS protests in Lagos.

The victims, led by their lawyer, Mr Adesina Ogunlana, and accompanied by family members and other #EndSARS protesters including a petitioner Dabiraoluwa Adeyinka, said they had come to debunk claims that nobody died or was shot on the night of October 20, at Lekki Tollgate.

Adeyinka alleged that families of victims and hospitals were being threatened or offered money to keep mum; and mentioned some of the hospitals.

Adeyinka said: “We took dead bodies to a hospital, only for them to tell us that that they cannot give us the data.

“I went personally to see their doctor. I met the HR and he told me to give him 24 hours to provide the database of all these people. Till date he has not got back to us.

“Can this heal their wounds? Can it replace their amputated legs? Can it bring back the dead? We just want justice. People were shot at. I saw it. They tried shooting at me. Someone else took my bullet.

“We don’t want to be marginalised in our own country, that is why we have come here today to show victims.

“They said nobody was shot at, they said nobody died. We have accounts of people that died. I was there on that stage. I was the one telling people ‘sit down. Don’t run.’ People died. People are still at the emergency ward, as I speak to you know.”

Many of the protesters that stormed the panel had PoP and bandages around their legs, arms, heads and chests. They said they were hit by bullets as they protested at the tollgate.

Ogunlana, a former Chairman of the Nigerian Bar Association (NBA) Ikeja branch, said that 14 of them were shot at the tollgate on the evening of October 20, while the 15th was shot at Ojodu Berger.

Police Action in Zaria, a Violation of the Sanctity of the...