Home Law Student Rendezvous When a Without Prejudice Communication Will Amount to Acceptance and Become Binding... 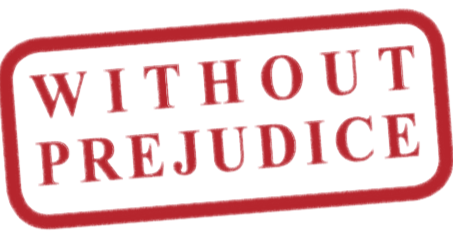 Without prejudice may be used by parties who are discussing or corresponding about an existing dispute, whether or not court proceedings have been issued. In the case of United World Ltd. Inc. v. M.T.S. Ltd. (1998) 10 NWLR (pt. 568) 106 at 118 paras. D-E it was held that; “when a correspondence is written with an expression ‘without prejudice’ it means without prejudice to the position of the writer if the term he proposes are not accepted. If the terms proposed in the letter are accepted a complete contract is established and the letter although written without prejudice, operates to alter the old state of things and do establish a new one”.

However, it must be noted that a communication can only be ‘without prejudice’ where the following conditions are satisfied:

In so far as communications are expressed to be ‘without prejudice’, provided they are a genuine attempt to settle, they cannot be relied upon in court proceeding if the attempt to settle fails. This is because were ‘without prejudice’ communications to be admissible evidence in court it would not allow parties the liberty to settle their disputes outside the courtroom as they would be afraid that whatever is disclosed in the course of the negotiations to reach a peaceful settlement would be used against them were the attempt to settle to fail. The Supreme Court gave judicial approval to this position when it held in the case of Ashibogwu v. Attorney General of Bendel State (1988) 1 NWLR (pt. 69) 138 at 170-171 that the law has always taken the view that parties should speak freely in attempting a settlement of their disputes. That freedom of discussion will be seriously prejudiced if any offer or admission made in the process of the negotiation could be given in evidence and be used to support a party’s case in court afterwards, should the negotiation breakdown. Also in Akanbi v. Alatede (Nig.) Ltd. [2000] 1 NWLR (Pt.639) 125 at 146 – 147, on rationale against admissibility of statements made “without prejudice” the Court of Appeal stated that “offer of compromise made expressly or impliedly “without prejudice” cannot be given in evidence against a party as admission. The law, on grounds of public policy, protects negotiations bona fide entered into for the settlement of disputes. The rationale for this doctrine is a complex of factors. The policy of the law is to encourage settlement. It is unfair that advantage should be taken of the willingness of one party to negotiate”.

Another exception to this privilege is that, if a without prejudice communication were conducted before a third party, failure of both parties to accept the third party as their conciliator would mean that this privilege would not apply to the without prejudice communication and it will be admissible as evidence. This was affirmed by the courts in the case of Akadiri v. Atanda (1986) 3 NWLR (pt. 27) 113 where the court provided an exception to the “without prejudice” rule when it held that, if the settlement proceedings were conducted before a third party, it is an important condition that precedent to the applicability of the doctrine that both parties must first accept the third party as their conciliator before their frank statements made subsequently to him at such conciliation meeting could be protected. The Court further held in conclusion that since in the instant case the condition precedent was not met, the privilege did not apply to the settlement held by the parties before the commencement of the suit.

Also the privilege accrued to without prejudice communications only applies to those who are parties to the negotiations. This privilege would not be applied if the party against whom it is sought to be applied was not a party to the document marked ‘without prejudice’. This was the position taken by the Supreme Court in the case of Nwadike v. Ibekwe (1987) 4 NWLR (pt. 67) 718 at 716 by stating that, in a trial, letters marked “without prejudice” and other communications are protected to the extent that they relate to the same action and are between the same parties, and not between a party and third persons.

Two further exceptions are that, the privilege is only applicable in civil proceedings and the privilege will also not apply if the document is tendered for any other purpose apart from the objective of proving the matter stated in it as can be gleaned from the phrase “in proof of the matters stated in it”. These are set out in Section 196 of the Evidence Act.

Tokede Akinloluwa is a 400 level law student of the University of Benin, Edo State. He is a literary enthusiast with several poetic write ups to my name. His interest is rooted in International Law, Alternative Dispute Resolution and Criminal Law. He can be reached on etijesunmi@gmail.com