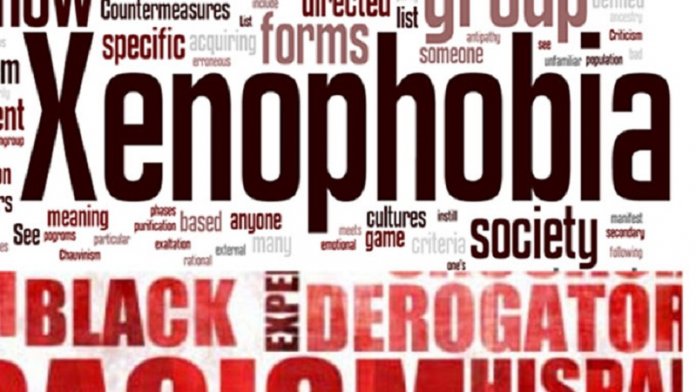 “No one is born hating another person because of the color of his skin or his background or his religion, they can learn to hate, they can be taught to love. For love comes naturally to the human heart than its opposite.”—Nelson Mandela

The notorious nexus which has plagued the continent for years, has been a bane to the socio-economic integration of so many nations as in the African continent. Racism has a form discrimination which been vehemently declared as enemy in the world today, with the black man as the object of attacks in the big stage called the world. However, that does not mean than the black man himself is not guilty of this beast called discrimination in totality.

It can be said that the black continent has suffered the exploration of the ills of the whites for centuries, from the ills of slave trade and the selfishness and exploitation of colonialism and the interference of neo-colonialism in the post effect of the African society. But that does not mean that the blacks also have the right to violate the essence of the other men on their land and also their fellow black men.

Prior to 1994, immigrants from elsewhere faced discrimination and even violence in South Africa. After majority rule in 1994, contrary to the expectations, the incidence of xenophobia increased. Between 2000 and march 2008, at least 67 people died in what were identified as xenophobic attacks. In May 2008, a series of attacks left 62 people dead; although 21 of those were south African citizens. The Attacks was reportedly linked to xenophobia. In 2015, another nationwide spike in xenophobic attacks against immigrants in general prompted a number of foreign governments to begin repatriating their citizens.

However, between 2010 and 2017 the immigrant community in South Africa increased from 2 million people to 4 million people. The proportion of south Africa’s population increased that was foreign born increased from 2.8% in 2005 to 7% in 2019, according to the united nations international organization for migration, in spite of widespread xenophobia in the country. This made South Africa the largest recipients of immigrants on the African continent.

Xenophobia simply put is the fear and hatred of strangers or foreigners or of anything that is strange or foreign.  Etymological meaning of Xenophobia stems from the ancient Greek words xenos meaning “strange”, “foreigner”, and phobos, meaning “fear”. Also according to Wicker xenophobia is defined as “one among several possible forms of reaction generated by anomic situations in the societies of modern states’’

In furtherance of description of this article, xenophobia is often attached to the extreme dislike or hatred directed to those who are citizens of a country; that is the dislike or hatred of one’s nationality by the other. According to human rights, this deep dislike of non-nationals by nationals of a recipient state, including its manifestation, is abusive violation than that is unconstitutional according to the south African human rights commission of 1998.

ALSO READ   RE: FG to Drag Judge Before the NJC for Granting Sowore Bail

Migrants across the globe often experience discrimination, exploitation and human rights violations such as xenophobic attacks have left thousands of foreigners dead and injured with their properties destroyed as well.

Xenophobia and the Law

The protection of fundamental and freedoms transcends municipal and international law. However, it is the state’s responsibility to uphold human rights through its laws and enforcement.

The above cannot be said in the reality of the South African experience, thanks to the untoward and censurable attacks meted out on aliens therein, particularly Nigerians. Leaving many losing not just their properties but their precious lives.

We have the African Court on human rights that sees the obligations of countries within the sphere of international human rights; the court being guided by the tenets of the African charter on human and people’s Rights.

According to Article 7 of The Rome statute, everything that xenophobia stands for was prohibited from the crimes of murder, extermination, enslavement, deportation or forcible transfer of population, torture and other valid crimes against humanity were criminalized.

The international law provides that state have a duty protect aliens from xenophobic attacks. Heads of state wherein these attacks are manifest are triable at the international criminal court in Hague with respect to serve deterrence as to these hateful acts.

Other legislation in dealing with xenophobia are The Promotion of Equality and Prevention of Unfair Discrimination Act 4 of 2000, Refugees Act 130 of 1998, The Protection from Harassment Act 17 of 2011 and the Immigration Act of 2002, according to judge Mojapelo noted these act prohibit things as-

ALSO READ   The Power of the Governor of CBN to Remove Bank Directors: Between Fiction and Legality

According to the case of kiliko and Others v Minister of Home affairs and others 2006(4) SA 114(C) at para 28 where the court held:

“The state under international law, is obliged to respect the basic human rights of any foreigner who has entered its territory, and any such person is under the South African constitution, entitled to all the fundamental rights entrenched in the bill of rights, save those expressly restricted to South African citizens”

Also in another South African Case Mamba and Others v Minister of Social Development (unreported case no 36573/08, 12-8-2008) according to Makogba J. said inter alia “it is sometimes challenging even to the courts, when it comes to the type of socio-economic remedy to be awarded where constitutional infraction has been found”

Firstly, some studies reveal that the intrusion of foreign migrants into vulnerable communities beset by joblessness and despair inevitability produces a tinderbox that sparks violence.

Migrants are easy targets. That’s because they are seen as being better off than locals. They therefore become targets of people who feel their circumstances have not been addressed by government. It is no surprise that xenophobic attacks have typically occurred in poor neighborhoods that have been affected by service delivery protest since the mid-2000s.

Secondly, xenophobia thrives on ineffective policing in South Africa. Barely two days after the Johannesburg attacks started, the national police spokesman admitted that the police were running out of resources to manage the violence. This prompted the [rimier of Gauteng, the country’s economic hub, to threaten to also deploy the army if the violence continued]

Examples of the police’s inability to maintain order and respond to threats to property and livelihoods are legion. This in part forces people to take the law into their own hands.

But the police are sometimes complicit in stocking anti-foreign sentiments. The July 2019 raids on foreign-owned business in Johannesburg in apparent efforts to stamp out illicit goods added to the climate of xenophobia. When some business owners retaliated against the police, some local leaders appropriated the language of “threats on south Africa’s sovereignty” to justify the police response.

A perfect example is seen in the case of Somali Association of South Africa and Others v Limpopo economic Development, Environment and Tourism and Others (2015) Vol 1 SA 151(SCA)

In the Somali case, Musina Spaza shop owners were told they would need a permit to continue operating. The police closed shops and confiscated stock of owners who did not produce permits. The police even closed businesses where valid permits were presented. The applicants therefore approached the high court with application of declaration-

The Supreme Court of South Africa held that:

This case was generally lauded as a great victory for foreign national who run informal business as a means of living.

How then, does xenophobia distract south Africa and Nigeria from what should be their leadership on core issues?

The weighty issues of creating a humane and just society for South African government. Outsiders can make some diplomatic noises and occasionally boycott South Africa. But these actions are likely to drive vital change.

In fact, the overreactions by Nigeria and other African countries simply undercut the South African constituencies that is crucial stake in wide-ranging reforms that address the multiplicity of Problems around xenophobia.

In the previous instances of xenophobic violence, Nigeria urged the African union (AU) to force south Africa to take action. But such unhelpful statement only inflame passions and prevent civil diplomatic discourse.

Instead, the best policy would be for Nigeria to engage South Africa through their existing binational commission.

The solutions rather than the perennial relapse into shouting matches and hardening of rhetoric, it is essential for not only Nigeria and South Africa, but all the other nations of Africa and the world at large to make a decisive leadership, nations of Africa must articulate immigration policies.

The newly-inaugurated AU free movement of persons protocol might not be implemented if South Africa and Nigeria do not join hands to make it a reality. More ominously, migration to South Africa as the premier African economy will only get worse in the in the coming years. This, as Europe and the united states tighten their borders against.

Also, without the leadership of its two major economies, Africa is not going to make any traction on the new treaty establishing the African Continental Free Trade Agreement.

In irony, the WEF meeting in cape town addressed ways to boost the intra-African trade. Nigeria last year boycotted it due to xenophobia, which was utterly bizarre on their own path.

Conclusively Africa can only overcome the enemy of xenophobia, as it must move to give credence to national integration and correspond its energy towards a united Africa which is free of any form of discrimination and immigration issues which is seen as a threat to its society, it must also frown at every act which is seen as a push to indict its stand on having a united Africa free of discrimination no matter their nationality.