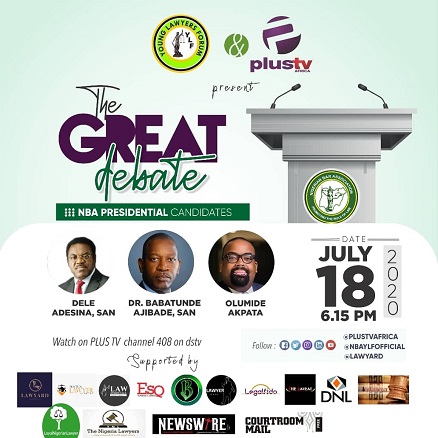 The Young Lawyers Forum (“YLF”) of the Nigerian Bar Association (“NBA”) is set to host the first ever NBA Presidential Debate (the “Debate”), to elicit the views of the respected candidates for the esteemed office of the President of the NBA (“OPNBA”).

The Debate which is the first of its type, is being organised in partnership with fast-rising television station, Plus TV Africa, and has been scheduled to hold by 6:15pm on Saturday, 18 July 2020. The Debate will be broadcast live on Plus TV Africa, DSTV Channel 408 and simultaneously streamed live on multiple social media channels including Facebook, Twitter and YouTube, to ensure broader participation.

The Debate will feature the three candidates contesting for the office of the OPNBA at the NBA Elections slated to hold July 29 – 30, 2020, to wit: Mr. Dele Adesina, SAN; Dr. Babatunde Ajibade, SAN; and Mr. Olumide Akpata.

We note that the NBA Elections for 2020 coincide with the 60th anniversary of the NBA and a moment of global significance as the world grapples with the impact of a pandemic that has compelled industries, organisations, associations and individuals to rethink how things are done.

In view of the facts stated above, it is imperative that the conversations around the NBA Elections adequately reflect necessary considerations for positioning the NBA as an association that has come of age and is able to provide guidance to various categories of its members and indeed the nation on building resilient businesses and a strong economy while upholding the rule of law.

Without a doubt, Young Lawyers constitute a large number of the prospective voters at the NBA Elections and their concerns have invariably dominated the conversations around the elections. Therefore, the YLF is convinced of the need to engage the respected senior lawyers vying for the OPNBA on the various issues that directly and indirectly impact on the welfare and professional development of Young Lawyers.

The issues to be discussed at the Debate include but are not limited to: enhancing the remuneration of young lawyers across the country; capacity building for young lawyers; independence of the judiciary; foreign and domestic incursion into Nigeria’s legal services market; professional ethics and discipline; continuing legal education; representation and inclusion of young lawyers in the affairs of the NBA; rule of law; administration of justice system; legal education reforms; and international collaborations.

We look forward to a robust debate that will help to shine the light upon the critical issues that should shape the policies of the NBA. To this end, we hereby request inputs from all Young Lawyers in different parts of the country, and indeed all members of the NBA, through the submission of questions on areas they require clarification. Such questions can be submitted to the YLF via the link hereafter provided: https://bit.ly/nbadebate2020.

We trust that at the end of the debate, all Young Lawyers and other members of the NBA will be well enlightened on the various issues that are relevant to the NBA Elections and the NBA as an association.

Our heartfelt appreciation goes to the President of the NBA, Mr. Paul Usoro, SAN for his support and guidance. We are also grateful to Plus TV Africa for the partnership and support in hosting the Debate.

For further enquiries about participation and support, kindly send an email to nbaylf@nigerianbar.org.ng and copy tobiadebowale@nigerianbar.ng

Aggrieved Persons Have the Right To Opt Out Of NBA –...