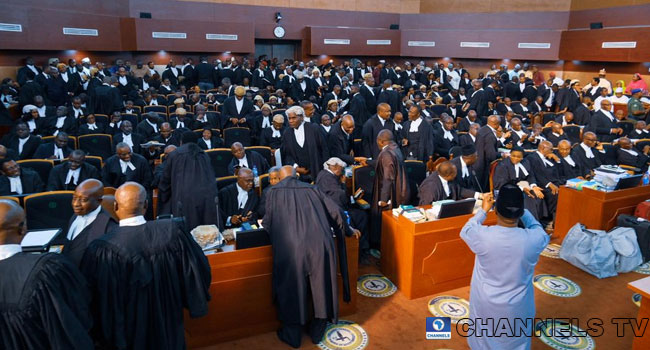 The Supreme Court, on Friday, dismissed an application asking it to review its judgement which nullified the victory of the candidates of the All Progressive Congress (APC) in the 2019 general elections in Zamfara State.

With one out of seven justices dissenting, the court, led by the Chief Justice of Nigeria, Tanko Mohammed, held that the application by the APC was an abuse of court process.

The fresh application before the apex court was brought by a faction of the APC led by a former governor of the state, Abdulaziz Yari.

The Supreme Court had, on May 24, 2019, ruled that the APC did not conduct valid primariesfor the 2019 general elections in Zamfara.

The apex court validated the judgement of the Court of Appeal, Sokoto Division, which ruled that no valid primaries were conducted by the APC in Zamfara State.

The court in a unanimous judgement by a five-member panel decided that a party that had no validly nominated candidate cannot be said to have emerged winner of the elections.

In an appeal brought by the APC, the apex court ruled against the appellant and ordered a fine of N10 million against the APC.

“Candidate other than the first appellant with the highest votes stand elected. A cost of N10 million is awarded against the appellant,” the court had ruled.

Dissatisfied with the apex court judgement, APC filed an application on June 17, 2019, asking the apex court to “review, amend, correct and/or set aside the consequential orders” contained in the May 24, 2019 judgment of the apex court.

In its majority judgement read by Justice John Okoro, the apex court said it lacks jurisdiction to review its own judgement.

Justice Okoro said that by Order 8 Rule 16 of the Supreme Court, it has no jurisdiction under any guise to interfere with any judgment once delivered by the court.

He further held that the APC’s application was an abuse of court process, incompetent and vexatious, because Order 8 Rule 16 is a clear and unambiguous law that prohibits it from going into a matter already decided.

Justice Okoro, citing several cases, made it clear that the farthest the apex court can go in a matter already decided is to correct accidental errors and slips and not to sit as an appellate court on its own decision.

“Even, our forebears did not leave anyone in doubt that a Supreme Court judgment, once delivered, cannot be adjudicated upon in the form of appeal by the same court,” he said.

The apex court insisted that there must be an end to litigation, holding that the finality of the Supreme Court is sealed and that no one can come through the back door to interfere with it.

“Let me warn here that political parties must obey their own constitution and relevant laws and where they fail or refuse to obey, the hammer of the court will always fall on them.

“It is the duty of the court to always take decision that will prevent anarchy in this country. Only serious matters must be brought before the Supreme Court,” he held.

Justice Okoro further awarded the cost of N2 million against the appellant to be paid to the first – 140th respondents.

The judge did not clarify if each of the 140 respondents is each to be paid N2 million or the N2 million is for all of them.

In his dissenting judgement, Justice Centus Nweze held that a judgement or order can be set aside on merit. He said the apex court has the power to overrule itself where necessary.

“It is in the interest of justice that I set aside the consequential order of this court.

“I hereby enter an order setting aside the said consequential order in the judgement in APC and Marafa.”