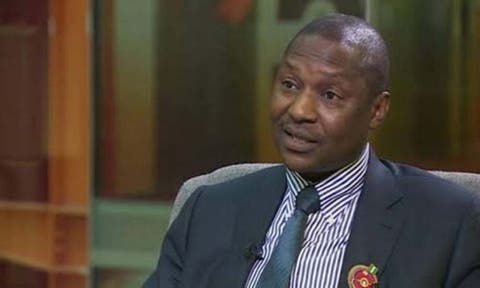 The Attorney General of the Federation and Minister of Justice, Abubakar Malami, has commended President Muhammadu Buhari for the suspension of erstwhile Rapid Response Team head, IRT, Deputy Commissioner of Police, Abba Kyari, over allegations of bribery by the Federal Bureau of Investigation, FBI.

Besides, the Government has inaugurated members of the governing council of the National Human Rights Commission, scoring itself high on the protection of the rights of Nigerian citizens.

The Attorney General of the Federation Malami, who inaugurated the Council on behalf of government Tuesday, said the Federal Government, “is committed to the protection of the human rights of all Nigerians and other nationals living in the country”.

The AGF who stated this at the Headquarters of the National Human Rights Commission in Abuja, said “the federal government has shown adequate capacity towards the protection of the rights of citizens and foreigners resident in Nigeria, given its responses to the indictments of some law enforcement officials”.

According to Malami, “the disbandment of SARS and setting up of various panels of inquiry investigating and awarding damages for human rights violations by SARS is a clear testimony to the fact that this government is fulfilling its international obligation to set up an independent National Human Rights Commission for the promotion and protection of human rights of Nigerians”.

Besides, the Justice Minister said that “It is a known fact that the present government had complied with the award of damages for victims of the 2012 Apo killings of Okada riders by security agents, as well as complied with the 2018 White Paper recommendations on Special Anti-Robbery Squad of the Nigerian Police”.

He commended “the giant strides made by the Executive Secretary and his management team in providing a purposeful and effective leadership in the absence of a Governing Council”.

He also enjoined the new Governing Council Members to be guided by the NHRC Act, and relevant Government circulars on tenure, the part-time mandate of Members except the Executive Secretary, emoluments etc.

In his speech, the Executive Secretary of the Commission, Tony Ojukwu, listed a plethora of key achievements made by the Commission, stating that funding and operationalization of the Human Rights Fund (HRF) have remained the great challenges in the Commission.

The Chief Human Rights Officer in Nigeria said, “Though there has been an increase in the budgetary allocation to the Commission recently, the increase he noted has been a far cry in meeting the mandate of the Commission and even in comparison to other Commissions in Africa like Kenya, Ghana, Morocco, Egypt and South Africa”.

Ojukwu also used the opportunity to commend the federal government in setting up the Independent Investigation Panel on defunct SARS and Other Units of the Police Force just as he sought the assistance of the AGF and the Federal Government towards raising additional fund to complete the investigative hearing.

In her response on behalf of the new Governing Council Members, the Chairperson, Dr. Salamatu Husseini Suleiman said that human rights protection has remained an important benchmark for checking development all of the world and that Nigeria cannot be left behind in deepening a culture of human rights protection that will be seen as a reference point within and beyond the African continent.

She solicited the assistance of the Justice Minister in the area of enhancing the welfare of workers in the Commission, pointing out that improved welfare package will always be an incentive to members of staff and that poor remuneration may result in a situation where workers will be leaving for greener pastures possibly in the Civil Society Organisations, to the detriment of the Commission’s growth.