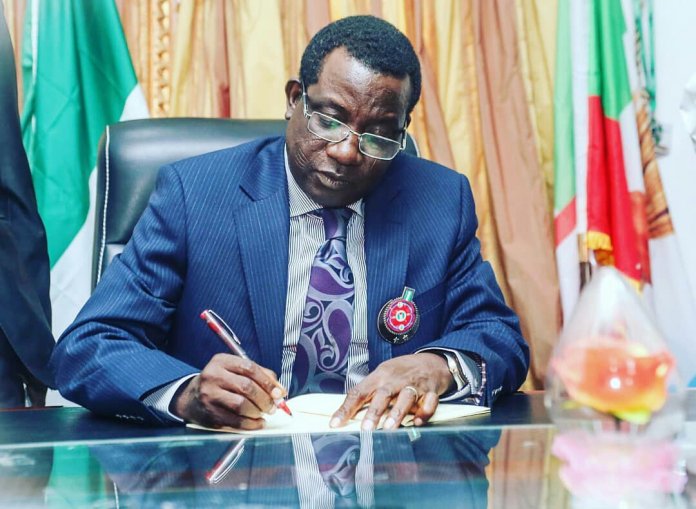 Chairman of the Northern Governors Forum and Governor of Plateau State, Simon Lalong, said the region has set up a committee on restructuring and the role of traditional rulers towards resolving the insecurity challenges in the country.

He advised that discussion on the review of the 1999 Constitution should be within the context of unity, stability, peace and progress of Nigeria.

Lalong made the remarks at the North Central Senate Committee’s public hearing on the review of the 1999 constitution review, in Jos, Plateau State.

He said: ”Of course, the much talked about issue of restructuring is also very much canvassed by different interests. This is the time to thoroughly deal with the matter and ensure that the agitations and anxieties being expressed are addressed.

“As Chairman of the Northern Governors Forum, to say that we have since set up committees on restructuring, role of traditional rulers, engagement with the youths and even economic reforms of the region. The reports of these committees will also be submitted to the Constitutional Review Committee for consideration.

“We have to conduct the discussion on the review of the 1999 constitution within the context of the unity, stability, peace and progress of the country. We should have an open mind to every submission, we should also not be ignorant of the desire by some internal or external forces to destabilise our nation by pushing their interests, under the guise of promoting constitutional review.

“We have to realise that there is no constitution that will ever resolve all our challenges as a people who are diverse in ethnic, religious, political and tribal affiliations.”

Lalong said issues of state police should be given top priority in view of the insecurity in the country, adding that his administration has gone far with the implementation of autonomy for the Judiciary, Legislature, and the Local Governments, even before the commencement of the strike by judiciary and legislative workers.

Meanwhile, a group of women from Plateau, Nasarawa and Benue States, under the umbrella of Women Political Participation Technical Working Group (WPP-TWG), have advocated for the creation of 37 more Senatorial seats in the country, that would be exclusively be occupied by women.

The group, which submitted a memorandum to the Senate Committee for the review of the 1999 constitution at the North Central public hearing in Jos, supported the proposed amendment of the constitution and called for a special consideration for women in governance.

Spokesperson of the group, Mrs Jiritmwa Morgak Goyit, who addressed journalists in Jos, after the submission, yesterday, said Nigerian women should also be honoured with the 35 percent affirmative action.

She appealed that the Constitution should kick against same sex running for a position that has deputy so that a man should either be Chairman and a woman serve as Deputy or vice versa, to promote gender equality.

She believed that the temporary but necessary positive measures would enhance inclusive governance that women earnestly yearn for.

Meanwhile, the leadership of Ohaneze Ndigbo worldwide, led by its President General, Ambassador Professor George A. Obiozor, yesterday, renewed the demands for restructuring, devolution of power and true .

federalism as panacea for the crisis bedevilling the nation.

He made the submission in Owerri at the Abia/Imo public hearing for the amendment of the 1999 constitution chaired by the former governor of Abia State and Chief Whip of the Senate, Senator Orji Uzor Kalu.

He said: “Fundamentally, what Ndigbo really want is some form of internal autonomy, based on a Restructured Nigeria,

“We (Ndigbo) are of the view that the federation of Nigeria must be a union of equals and the composite units must have the ability to stand without begging the centre for survival.

“That is a federal system of government with its characteristics of decentralisation and devolution of power among the federating units.

“In the context of the imperatives and urgency of restructuring Nigeria, we should focus on getting the right things done for the right reasons, and at the right levels of government.

“Indeed, what must be done and no longer what to do, is to recognise that history has an iron law of seriality of which no country, including Nigeria, can ask for exemption or exceptionalism.

“All signs of national tragedies foretold are present, today, in full force in Nigeria. In fact, it would require a restructured Nigeria to contain the present forces and tendencies towards a synchronised national crisis and even a possibility of national disintegration.

Urging leaders in the country to confront the nation’s realities and challenges, Obiozor said the nation’s political crisis stemed from injustice, inequity and lack of fairness.

He said: “Therefore, as national leaders, we must learn the lessons of history that in societies here, truth comes last, tragedy comes first. And that the perennial problem or continuous dilemma in Nigerian politics always evolve around the issues of justice, equity and fairness. As has been said several times, throughout history, those denied justice have had no interest in peace.

“We would expect you at the end of this exercise, and in the interest of the nation, its unity and progress, to conclude with decisions guided by love and not by hatred; and guided by our collective hope and not by our fears.

In his concluding remark the Southest Zonal Chairman of the public hearing, Senator Orji Kalu, reiterated the commitment of the Senate to address the submissions made by various groups at the two-day exercise. He appealed for calm among from various agitating groups, saying that the National Assembly would expedite action on their demands for befitting amended constitution.

Former Deputy Senate President, Ike Ekweremadu, said while a new constitution is possible and would become ultimately inevitable, the nation needs to amend the 1999 Constitution to create a provision for achieving that.

Ekweremadu, while fielding questions from reporters in Enugu on the sidelines of the ongoing zonal hearing on constitution review exercise of the 9th National Assembly said:

“However, there is no such provision to do so under our present Constitution, unless you are calling for anarchy. If you say we need a new constitution, the answer is simple. When other countries like Kenya and Brazil had a similar challenge, what they simply did was to amend the original constitution, in order to make a provision for how a new constitution can be enacted. We (the National Assembly) did it the last time, specifically in the 7th Assembly, including making a provision for a referendum, but it was not accepted.

“So, we need to amend Section 9 on how we can create a new Constitution, including the issue of referendum, to be able to do that.”

The lawmaker, who chairs the Enugu centre of the South East zonal hearing, also explained that creating an avenue for a new constitution would also help make the constitution more organised.

“We have done a whole of amendments, which many Nigerians don’t even know about. So, there is confusion already in differentiating what has been amended and what has not been amend. And it will only increase as we make more amendments. Even with ordinary Acts of the National Assembly, after several amendments or a far-reaching amendment, the usual and proper thing we do is to repeal and reenact the law.

On the calls for a national dialogue by ethnic nationalities, he said: “Once any nation runs into a problem like we do now, the usual thing to do is to say, okay, let us come together and talk. But in our case, there is nothing really new, say in this constitution amendment exercise from the past ones.

“Likewise, if you bring together all the ethnic nationalities, they are not going to say anything new. We have had conversions. We have had the national confab.

“Just as someone suggested, why don’t we just dust up all of the constitution amendments we have done before or simply improve on them and get the reasonable and required number to approve it and send it to the president? That is my opinion too.

“In the same manner, if we say let us look at those issues and resolutions we have had in the past confabs, nothing is new, and nothing has changed. But if we look at the recommendations and set up a committee to look at it in one week, we can now find a way to legislate on it.

“It is not enough to talk, we have to agree on how do we operationalise what we discussed. That is the issue. Unless we address this, it will be like every other talks or confabs.”

On the position of the constitution on grazing, Ekweremadu said: “The laws are straightforward and it was better for the states and federal officials to meet on the matter to resolve the impasse.

“If you look at the Constitution, the issue of grazing, essentially, should be a matter for the states because it has to do with land. Under the Land Use Act, which is part of our Constitution, the lands belong to the States and not to the Federal Government. So, when the states met and said, look, we don’t want open grazing, it was within the purview of their powers.

“I think we need to have a meeting between the state officials and federal officials at some point, instead of talking as if they don’t read anything in the constitution. We can’t be insulting ourselves on the pages of newspapers.”

•Falana makes case for secessionists, change of name for police

Rights activist and Senior Advocate of Nigeria (SAN), Femi Falana, yesterday, made case for secession agitators across the country before the Senate zonal public hearing on the review of the 1999 Constitution  in Lagos.

Falana, while giving insight on the memoranda he submitted before the committee, insisted that it was important to give secession agitators the confidence of peace and inclusion, if they must remain as Nigerians.

The lawyer also advocated that the Child Rights Act enacted in 2003, and the Disability Act, be domesticated and implemented in states if the constitution review must make meaning to the common man.

Falana also proposed a change of name from the Nigeria Police Force (NPF) to the Nigerian Police Service (NPS). To him, there must be sanctions for impunity.

“Our country is ruled by rule of the rulers and not rule of law. People commit all manner of crime and get away with it because there are no sanctions. This must change. The Social Security Bill must also work, so that jobless people can get stipends pending when they will get full employment.

“What can we do very quickly to save this country which is on the verge of collapse? If you don’t want people to break away from Nigeria, we must give them confidence, don’t declare a war.

“Therefore, for the constitutional amendment to be fruitful, for us to have genuine outputs from this meeting, peace must reign. We must address Nigeria’s problem frontally.”