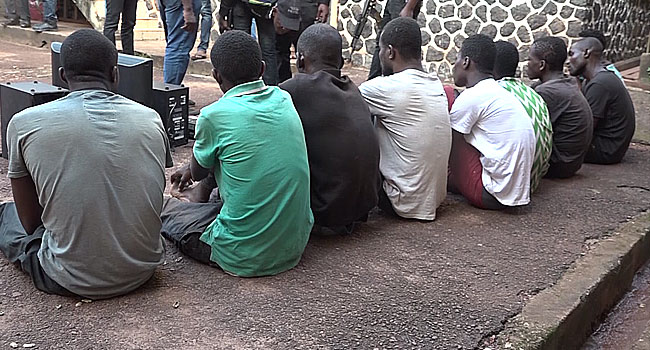 Ajah gave the advice while delivering a paper at the ongoing three-day training on the Implementation of Administration of Criminal Justice Act (ACJA), 2015 and Human Rights for Officials of Nigerian Correctional Service, Nigeria Police Force and Judiciary in Enugu.

The paper was entitled: “Role of the Judiciary and the Courts as well as Innovations in the ACJA Act 2015 and Administration of Criminal Justice (ACJ) Law of Enugu State”.

Ajah noted that parading suspects, even when they are seen in the face of the law as innocent, “is tantamount to media trial”.

According to him, parading a suspect or the media trial of a suspect jeopardises the chances of the suspect getting a fair hearing in the minds of right-thinking members of the public.

The judge noted that the media trial ends up as mental torture of the suspect, especially if he is finally proved innocent by the court.

He said that “mental torture was deeper and last longer than physical torture”.

“The constitution presumes every accused person as innocent until proved guilty from the point of the law.

“Incidentally, when the person undergoes court trial and is discharged and acquitted, there will be no opportunity of parading him again to say that he is innocent.

“Those who watched him before that had labelled him a criminal would not have the opportunity or time to watch him paraded as innocent.

“It is unfair hearing. It is bad and the constitution and the laws of the land are wholly against all forms of media and sensational trial of any suspects outside the court.

“The innocent person in question continues to suffer torment and mental torture throughout his lifetime and become a subject of humiliation and scorn even among his own people,” he said.

Ajah also urged the Federal Government to increase the number of police personnel, adding that having police strength of about 400,000 in the face of over 200 million people was grossly inadequate.

“The ideal police strength should be about a million. Where the Federal Government cannot recruit close to this target, the states should come in with state police to meet up the required numerical strength.

“It should be an average of one policeman to about 200 Nigerians,” he said.

He also called for a functional record system within offices of law enforcement agencies and courts in order to properly track activities of criminal elements in society.

“The system should be seamless and internet-based in order to be accessed easily by all stakeholders in the law enforcement and law systems as well,” he said.

Earlier, the Chief Executive Officer of UCHEFEM Consultancy Ltd, Mr Uche Owete, said that the training was meant to increase cross-sectoral coordination, competencies and capacities of major criminal justice actors to effect serious and durable changes in the sector.

This is for the overall benefit of the Nigerian Correctional Service and the justice system,” Owete said.

According to him, assurance of shared responsibility by these actors with a view to changing the justice landscape and reduce human rights violations will be achieved through this training.

“Inculcate the use of alternatives to imprisonment by magistrates in criminal justice administration as a means of reducing congestion in our correctional facilities and pretrial detention and the treatment of vulnerable persons, including children,“ he said.