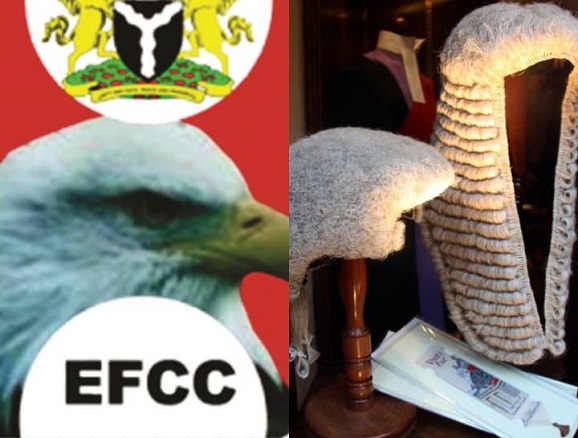 The Economic and Financial Crimes Commission (EFCC) has asked the Court of Appeal, Lagos Division to vacate an order striking out the name of a Federal High Court judge, Justice Mohammed Yinusa from nine counts of attempted perversion of the course of justice and corruption by a public official.

In a Notice of Appeal filed by its counsel, Wahab Shittu, and obtained by Channels Television on Thursday, the EFCC urged the appellate court to grant an order directing the Chief Judge of the Lagos State High Court to relist and restore the name of Justice Yinusa in the charge pending before the trial court.

The trial judge, Justice Sherifat Solebo, had discharged Justice Yinusa from the charges on Monday last week after the National Judicial Council (NJC) lifted the suspension it earlier imposed on him over allegations of professional misconduct.

Justice Solebo had held that with the letter from the NJC tendered by the defence, lifting the suspension of Justice Yinusa, he was immune from prosecution.

Dissatisfied with the ruling, the EFCC filed four Grounds of Appeal, arguing that the trial judge erred in law by reaching her conclusion.

In the Notice of Appeal dated February 2, 2021, the anti-graft agency submitted that a judicial officer was not immune from criminal prosecution by constitutional and statutory provisions.

Citing Section 308 (3) of the 1999 Constitution (as amended), the EFCC argued that constitutional provisions on restrictions on legal proceedings only applied to a person holding the office of the President or Vice-President, Governor or Deputy Governor.

Part of the EFCC’s appeal read, “The Federal High Court of Nigeria and a letter dated 23 December 2020 from the National Judicial Council) being administrative actions cannot operate to terminate criminal proceedings involving defendants which had reached an advanced stage leading to testimonies of 10 prosecution witnesses and the admission of several legally admissible evidential materials in the proceedings.

“The learned trial Judge erred in law by elevating administrative actions of unspecified nature and description over and above the trial of criminal offences vested in the trial court by constitutional and statutory provisions.

“A cumulative reading of Sections 153(1) and 158(1), paragraph 21(b) of Part 1 of the Third Schedule of the Constitution of the FRN 1999 (as amended) does not give rise to the interpretation that a criminal allegation against a judge must be first disposed off by the National Judicial Council (NJC) before criminal proceedings against a judicial officer can be initiated by the state.

“The Nganjiwa vs FRN’s (Supra) case did not decide that a matter determined by the NJC one way or the other cannot be subject to subsequent criminal proceedings against the serving judge in respect of alleged criminal offences.

“Constitutional powers assigned to the National Judicial Council and law enforcement agencies are distinct and separate and the exercise of any of such powers is not dependent on the other.

No date has been fixed for the hearing of the appeal and the judge has yet to respond to it.

The NJC suspended and recommended the retirement of Justice Yinusa in 2016 but President Muhammadu Buhari never acted on the recommendation.

The EFCC had alleged that Justice Yinusa in 2015 had constant and confidential communications with a Senior Advocate of Nigeria, Ricky Tarfa, who was handling three lawsuits before him.

It also claimed that the judge collected N1.5 million bribe from Tarfa for the purpose of giving favourable rulings and judgments in the cases.

Justice Yinusa was also accused of receiving N750,000 from a former Senior Advocate of Nigeria, Joseph Nwobike, between March 2015 and September 2015, to get “favourable” judgment in some cases.

He faced the charges alongside the second defendant and an employee of Rickey Tarfa and Co., Esther Agbo, who was accused of paying N1.5 million allegedly received from Tarfa into Yunusa’s UBA account.

They both pleaded not guilty to the charge.