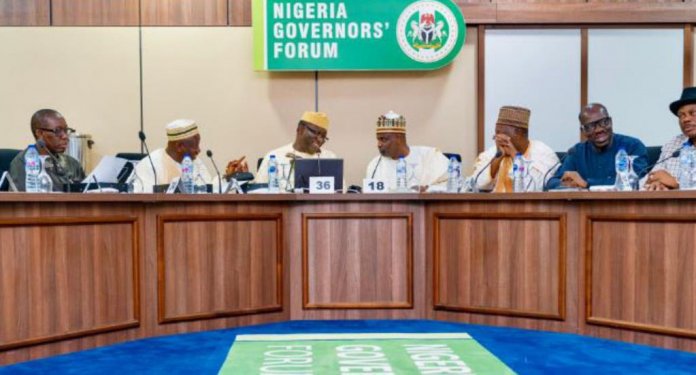 The Nigeria Governors’ Forum (NGF) has said that it was largely unnecessary the executive order 10 signed by President Muhammadu Buhari on the judicial autonomy, saying the president was ill-advised.

The governors noted that they expected President Buhari to have consulted widely before issuing the order, declaring that exercising such powers unilaterally was tantamount to illegality.

The vice-chairman of NGF and Governor of Sokoto State, Aminu Waziri Tambuwal who spoke in Ado-Ekiti, the Ekiti state capital on Thursday said the governors are committed to the independence and autonomy of the judiciary in the overall interest of the nation’s democracy.

He spoke on the topic, ‘Judicial Autonomy; Perspectives of the Nigeria Governors’ Forum’ at the state Special Attorney General’s Colloquium held in honour of retiring Chief Judge, Justice Ayodeji Daramola.

Tambuwal said Buhari was Ill-advised in issuing the order that craved judicial autonomy for states, explaining that the implementation of the autonomy does not require a fiat by the president and that such illegal action undermined the powers of the governors.

He said, “As Governors of the 36 States under the platform of the Nigeria Governors’ Forum (NGF), let me state very clearly that we are unequivocally committed to the autonomy of the judiciary and the legislature.

“The recent misunderstanding on the financial autonomy of the Judiciary is predicated on the need to establish an implementation framework to the 4th Alteration of the 1999 Constitution of the Federal Republic of Nigeria in Section 121(3). What we have questioned, and we have made this known at every opportunity, is the process of implementing this provision of the Constitution.

“As Governors, we will be failing in our responsibility if we refuse to draw the attention of the President, stakeholders and the country to grave concerns about the constitutionality of Executive Order 10 of 2020. That was the basis of the position that we took on Executive Order 10.

“The Executive Order 10 ostensibly intended to support the implementation of judicial financial autonomy, was completely unnecessary and ill-advised. Let me at this juncture state clearly that we never questioned the right of Mr President to issue Executive Orders. We only stated that S.121(3) did not require Presidential Executive Fiat to become implementable. Provisions of the Constitution are self-executing and S.121(3) is not an exception.

Tambuwal expressed delight that consensus has finally been reached on the autonomy conundrum and opined that the strike by the Judicial Staff Union of Nigeria (JUSUN) is expected to be suspended anytime soon.

The governor revealed that the Presidential Implementation Committee on the Autonomy of State Legislature and Judiciary lacked the requisite knowledge of the constitution, requesting President Buhari to disband the committee, ” to avert future rancour between the various arms of government, arising from misconceived guidance from a committee lacking the requisite understanding of constitutional matters.”

“The agreement allows a period of 45 days for implementation structures to be put in place across States including the enactment of a Fund Management Law which will grant the Judiciary the power to manage its capital and recurrent expenditures in accordance with the provisions of the constitution.

“Budgetary releases to the judiciary will be pro-rated based on the actual revenues recorded each month by the State government. Monthly revenue reconciliation and allocation will be presided over by a State Account Allocation Committee (SAAC) to be set up under the Fund Management Law – a similar practice to what we have at the federal level.

“We hope that this will put an end to the long weeks of strike action that have seen our judicial and criminal justice system grounded to a halt. We have lost so much in the past weeks. The big takeaway is the centrality of communication, sincerity, trust and dialogue,” the People’s Democratic Party governor said.

On his part, the Governor of Ekiti State, Dr Kayode Fayemi, stated that the issue of judicial and legislative autonomies is advantageous, saying the governors also have limitations based on constitutional provisions.

The chairman of NGF said, “Who is to take capital spending for the judiciary and legislature has always been the controversy. The governors will continue to hold our judiciary with reverence because we know that this democracy will not endure if we subject our judiciary to the jackboots of the executive.

“There is no questioning the fact that we can do a lot more for our judiciary to make it truly independent.”

In his contribution, Justice Daramola said judicial autonomy is as old as the 1999 constitution, saying the section 121 (3) was simple and should be respected by state governors.

“If our monies are paid directly, we will utilise it judiciously more than it was being spent for us by the executive. The governors must allow the judiciary and legislature to be run like the National Assembly.

“Nigerian judges are the most hardworking in the world. How can our salaries be there for 15 years without upward review? This is the highest point of injustice ever,” the jurist said.

The Attorney General and the Commissioner for Justice, Olawale Fapohunda said judicial autonomy is necessary at rescuing the justice system from all its sicknesses and as well guarantee access to justice by the people.

Why NBA-NEC Suspended Bayo Akinlade as Chairman of Ikorodu Branch