A Kano-based legal practitioner, Muhammadu Sa’idu Tudun Wada, has decried the commando-like manner he said the Economic and Financial Crimes Commission (EFCC) descended on his office along Ahmadu Bello Way in the state capital on Thursday.

He told Nigerian Sketch on Friday that EFCC agents in three Hilux buses rushed into his office premises during working hours and chased all the lawyers and clients out before sealing the place.

“They did not say anything to anyone. They just came in with guns and started shouting at us to leave immediately. When I asked them whether they have search warrant or a court order, they shouted me down,” Tudun Wada said.

A source at the EFCC confided in Nigerian Sketch that a lawyer filed a petition against Tudun Wada that “his source of income is not known.”

But Tudun Wada said “That is okay. I don’t have any problem with anyone who filed a petition against me, but I was not confronted with any petition. I was not invited by the EFCC. They just trespassed into my office like armed robbers and chased us out like criminals. This is unacceptable to me and I will challenge this embarrassing and unconstitutional act.”

He said “If EFCC will do this will do to a lawyer and get away with it, then noone is safe in this country. The EFFC is a creation of the law and has no right to act outside the law. And the law is clear on how to carry out an investigation on a petition.

“The doctrine of fair hearing and that of presumption of innocence have been murdered by an agency that was supposed to uphold them. I will certainly challenge this.”

Tudun Wada said the EFFC agents who sealed his office still did not give him any invitation letter, and when he asked them, they simply told him that if he likes, he may go to their head office in Abuja.

“I will file an action for enforcement. I have a right to own a property everywhere in Nigeria as a citizen of the country.”

Tudun Wada only recently finished building the said office premises and moved in while lawyer in Kano State have been visiting the office to congratulate him on the achievement. 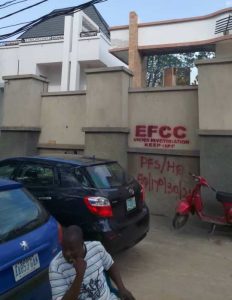 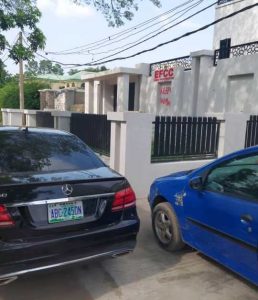