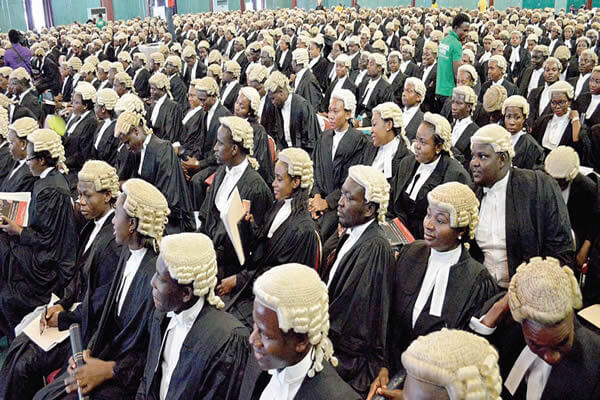 Lawyers and law officers in the Ebonyi State Ministry of Justice has begun an indefinite boycott of all government cases in court.

According to them, the actions follow Governor David Umahi-led administration inability and unwillingness to cater to the welfare of the law officers in the state.

The lawyers under the aegis of Law Officers Association of Nigeria (LOAN), Ebonyi Chapter through its chairman Barr. Ogbuinya Ndubuisi made this known while addressing newsmen in Abakaliki.

Ogbuinya who is also the Principal State Counsel in the State Ministry of Justice also noted that their contemporaries in Enugu, Abia, Anambra and Imo States were being treated better than them in terms of welfare packages.

He then appealed to the state government to look into the welfare of law officers in the state, noting that lots of memos and correspondences on the subject matter have been written and sent to the State Government but have not yielded the desired result.

According to him, the boycott on government cases will continue indefinitely until their requests are addressed holistically.

When Tribune Online visited Ebonyi State Judiciary today, it was observed that the boycott crippled the activities there due to the absence of state counsels to attend to cases as private practitioners, litigants were sighted loitering around the court premises.

Also, the officers and men of the Nigeria Correctional Services and awaiting trial inmates were found stranded.

State Counsels from the ministry were seen protesting over what they described as gross and unwholesome neglect of their welfare by the Ebonyi State Government.

Investigation revealed that they decided to boycott court sittings in order to get the present administration to address issues bordering on poor remuneration, non-funding of government cases and government refusal to accommodate them in the payment of the national minimum wage.

“The Law Officers have been doing their best to conduct government cases to the best of their ability and won a lot of cases.

“If you go to Enugu Correctional Centre, over 60% of inmates are from conviction secured by Law Officers from the Ministry of Justice, Ebonyi State but the problem is that we do this work with our own resources.

“Most times, when you embark on this journey and come back and write facts about the expenses, you don’t get anything from it but the worst is that there is a document that harmonizes the condition of service of Law Officers and that of Magistrate and Judiciary that took effect from the first Executive Governor of the state.

“That document emanated from the Attorney General of the Federation, wherein our welfare is harmonized with that of the Magistrate and it has been like that until two years before Governor Martin Elechi left office. He approved N200,000 to the Magistrate outside allowance, leaving us behind; we have written several Memos to that effect all to no avail.

“The most recent is the 2020 Minimum Wage where every Civil Servants got their stake but we all at the Ministry of Justice were outrightly excluded, not even a kobo was added to us. We used to have two (2) domestic servants but somewhere along the line, they removed one (1) even the remaining one that survived it, it is not worth the circular provided that we are being paid for.

“It may surprise you that in the entire state, we are only 30 lawyers covering all the Magistrate Courts, all the High Courts, Industrial Courts, all the Federal High Courts, Court of Appeal and so on; the workload is much but there is no commiserate remuneration to that effect.”

All efforts to get the State Attorney General and Commissioner for Justice, Barr. Cletus Ofoke and Permanent Secretary of the Ministry, Barr. Albert Alo, to react to the development proved abortive as none of them answered their calls or replied the text messages sent to them.