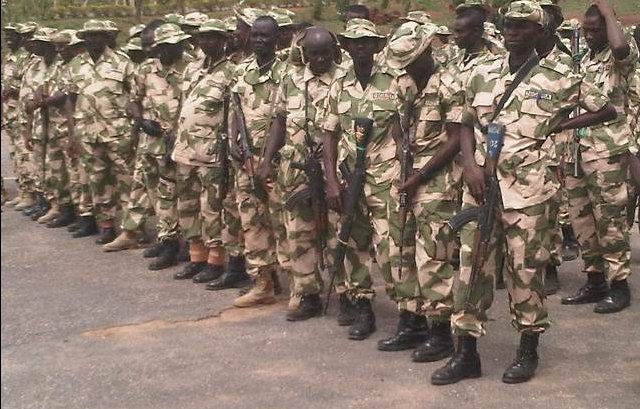 With insurgency in the north and general insecurity, the Nigeria police appears overwhelmed. The police, before the present security realities were struggling to discharge their duties effectively and efficiently. The consequence of the present security situation is that soldiers, who are trained statutorily to fight international aggressors, have been deployed to assist the police in performing their duties.

Added to the challenges of the Police is poor performance, which is usually attributed to under-funding and lack of motivation of its ranks and file. Apart from the inability to effectively tackle crime, there is this sense of mistrust between the police and the citizens, such that many communities have established armed vigilante groups at local and state levels.

The military have the constitutional role of defending the territorial integrity of the country against external aggression, to coordinate the enforcement of immigration law and customs, as well as to protect the country’s borders, among others.

On the other hand, the police have the responsibility to protect life and property, detect and investigate crimes, and to maintain law and order. Therefore, the increasing deployment of military forces for internal security operations across the country underscores the profoundly dysfunctional state of Nigeria’s public safety institutions, particularly the ineffectiveness of the police force.

Lagos based lawyer and human rights activist, Chief Malcolm Omirhobo, said the act is condemnable. According to him, it is inappropriate for armed forces – the Army, Navy and Air force – to police towns and cities because it is illegal, unlawful and unconstitutional.

His words: “By law, the police and the Army have their primary duties and responsibilities, which they are trained to do, spelt out in black and white. Section 214 (1) of the 1999 Constitution (as amended) establishes the Nigerian Police Force as the only policing authority in Nigeria.

“Section 4 of the Police Act spells out the general duties of the police thus; it is the duty of the police to prevent and detect crime, apprehend offenders, preserve law and order, protect life and property and due enforcement of all laws and regulations with which they are directly charged.”

Citing Section 217(1) (2) of the Nigerian Constitution, which establishes the Nigerian Armed Forces, Omirhobo re-echoed the fact that it the duty and responsibility of soldiers to defend Nigeria from external aggression and maintain its territorial integrity by securing its borders from violation on land, sea and air.

ALSO READ   Intellectual Property in Nigeria: A Summary of Protectable Rights in Nigeria

“By reason of area of specialisation and competence permitted by law, soldiers cannot do a better job than the police in the act of policing Nigerian towns and cities, because they are not trained to do the job of policing. They are trained to kill and not to police. Soldiers have messed up the entire internal security architecture and fabric of Nigeria through their various failed operations, like the python dance and crocodile smile.

“Notwithstanding, there are instances where by law, both the Army and police can perform the duties and responsibilities of each other. By law, the police can perform such military duties within or outside Nigeria as may be required of them by the Police Act, or any other Act,” he explained.

Omirhobo added that by virtue of Section 217(2)(c) of the 1999 Constitution, the Army can be involved in the act of policing in aid of civil authorities to restore order when called upon to do so by the president, but subject to such conditions as may be prescribed by an Act of the National Assembly.

He said: “Unless in compliance with the law, neither the police nor the Army have the right or powers to perform the duties and responsibilities of the other. To do so will be illegal, unlawful and unconstitutional.”

A Kano based lawyer, Prof. Mamman Lawan, said the constitutional role of soldiers is to defend the country from external attack. He stressed that they are not meant for internal services. Prof. Lawan maintained that it is inappropriate for soldiers to police cities and towns.

“What we see happening in Nigeria is, perhaps, as a result of the inadequacy of the police in the face of increasing security challenges. Nigerian military have and will continue to overstep its constitutional bounds by usurping the functions of the Police in the maintenance of law and order.

“The military must not be allowed to abuse Section 217(2)(c), because the Section does not intend to make a soldier a policeman, rather the said provision is for the Nigerian Army to complement the Police in the discharge of its duties when called upon by civil authorities in restoring law and order in situations as contemplated in section 305 of the Constitution, which is in time of emergency. Some may justify it on the basis of Doctrine of Necessity and in the name of national security,” he argued.

Mr. Nathaniel Ngwu, a human rights lawyer, said the 1999 Constitution provides for the establishment of Nigeria police force under section 214, while that of the Armed Forces of the Federation is under Section 217. Section 218, he explained, provides for the command and operational use of the Armed Forces by the President. According to him, by the provisions of the Constitution, the police was established to maintain and secure public safety and order within Nigeria.

“Section 4 of the Police Act Cap P19 2004, is very categorical in defining the duties of the police as thus provided: “The police shall be employed for the prevention and detection of crime, the apprehension of offenders, the preservation of law and order, the protection of life and property and the due enforcement of all laws and regulations with which they are directly charged, and shall perform such military duties within or outside Nigeria as may be required of them by, or under the authority of this or any other Act,” Ngwu explained.

He noted that it is within the powers of the police to secure life and property in Nigeria, adding that their role is not subject to any authorisation by the President or the Governor before they could act, although they are under the command of the Inspector General of Police, who is appointed by Mr. President on the advise of the Nigeria Police Council. The police, he maintained, is constitutionally empowered to act on measures and policies leading to the prevention of crimes and securing life and property within Nigeria.

Citing section 1 of the Armed Forces Act Cap A20 2004, he pointed out that the establishment and functions of the Armed Forces, which comprise the Army, Navy and Air Force, include functions as may be assigned to them by the President in consultation with the National Assembly. Such functions, he said, would be for the defence of Nigeria by land, sea and air. He said it includes such duties as the National Assembly may from time to time prescribe or direct by an Act.

“The Police was created basically to maintain internal safety and public order, which is encapsulated under Section 12 of the Police Act. So, should there be any need to invite any branch of the Armed Forces, the President in exercising his constitutional roles must do so in consultation with the National Assembly. What the authorities are failing to do is transparency and commitment to the welfare of the people. The present government might have good ideas or be doing some great work, but it portrays its actions as if it is not concerned with the plight of Nigerians,” he stated.

Giving insight to why it is inappropriate for soldiers to police towns, he said an Airforce officer allegedly shot an ordinary unarmed trader at Ladipo market just on a flimsy business transaction. Up till now, he said, there is no investigation by the Armed Forces or from the authorities or even from Mr. President to find out who the officer is and why he took arms into the market.
“It is also in the news that a team of Nigerian Custom Officers swamped on a community in the Southwest on a tip off that smugglers are allegedly hiding in the community and caused deaths and injuries on some people within the community. The use of the military or soldiers to police Nigerian communities is not necessary. It is unwarranted and unconstitutional. The police should be trained both in civil and military services,” he advised.

Also, Mr. Ayo Ademiluyi, a lawyer, based in Lagos, repeated that the Nigerian Army has its constitutional duties well spelt out under the 1999 Constitution. According to him, it is specifically assigned the task of protecting the territorial borders of Nigeria from external aggression and protecting its sovereignty. The task of internal policing, he insisted, is that of the Police. He argued that soldiers ought not to police towns and cities.

Ademiluyi explained that the overall decline in the socio-economic situation of the country reflects in the rot that engulfed the Nigeria Police Force with poor pay and terrible living conditions. His words: “This has dampened the morale of Police officers and increased banditry and kidnapping in the country. The Police, if well remunerated and motivated, can work effectively without deploying soldiers.”

The Marriage, the Death and the Law – Abdulrasheed Ibrahim