Home Opinions My Grouse: The CJ’s Directive; To Registrars or Learned Brothers? 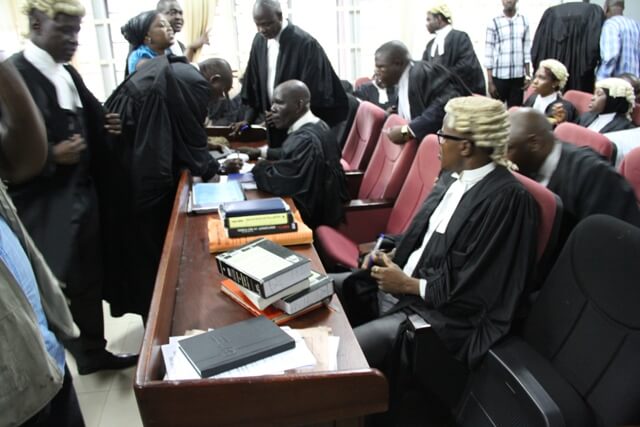 For every lawyer in active litigation, the news of the recent directive by the Chief Judge of Lagos State to all Registrars that notifications on when courts would not sit must be sent to both lawyers and litigants at least 48 hours before the adjourned date is the best way to start off the year.

Have you ever had to jump on a moto bike (okada) from Ajah to Ikeja High Court, probably because, you got to your office at Ajah by 8:30am, haven spent about three hours on the third Mainland bridge coming to work from your house which is actually at Ikeja? Then you get to court at a few minutes past 9am looking all scuffled only to find out from the Registrar that the court would not sit? Or you flew from Abuja to Lagos for a matter, only to be told that My Lord has gone for some official assignment and would not be sitting. Let us not even talk about the sleepless nights we sometimes spend, reading through piles of files and the times we had to sit in the courtroom chatting away on a Monday morning, only to be informed that court would not sit. Imagine the several times you had to waste the most productive hours of your day in a court that eventually would not sit. Depending on the part of Lagos you go to court from, some lawyers spend a whole day to and from court. In most cases, the notification that court would not sit comes late enough to mess up a whole day for even those that live near by. The worst part of it all is, the only information you would be obliged with, is that, “court will not sit”.  There are usually no explanations and no apologies (not that they mattered at such situation anyway). My point is that, whichever way one looks at it, the directive from the CJ is a welcomed development which should immediately be replicated in other jurisdictions all over Nigeria. Time should begin to mean a whole lot to lawyers.

However, I still have my reservation . Should this directive by the honourable CJ really be to the Registrars? Would the good intentions of this directive be met if it is limited to only the Registrars? I doubt if it is wholly the fault of Registrars that lawyers are not notified timeously of courts’ sitting schedule. In most cases, we all sit in the courtroom with these Registrars until around 12 noon when they make the announcement that court would not sit. Not because they chose to withhold the information but because they would also have gotten the information from My Lord or the instruction from My Lord is that the information be released at a specified time.

I am already imagining how the CJ’s office  would be inundated with petitions and complaints from lawyers against the Registrars. What then happens? Would a Registrar be punished even when it is obvious that it was not his fault that notice of adjournment was not issued within 48 hours or even at all? A person cannot give what he does not have. You cannot punish the Registrar if he was also not aware that court would not sit, which I would like to believe is the case most of the time. So, how is this directive to the Registrars going to help lawyers and litigants?

I strongly recommend that the CJ issues a similar brotherly directive to Judges. This would balance the directive already issued to the Registrars. In the event that the brotherly  directive has been issued to My Lords, the information should be made available to lawyers and litigants. Apart from helping lawyers to properly situate their grouse at the appropriate time, it would also help in restoring public confidence in the judicial process.

May this directive succeed. May it be the case that the day has come when lawyers go to court with full confidence that their matters would be heard. With minor exceptions to those periods of human imperfections and unplanned happenings.

In all, I must say, the first step has been taken, hopefully, the next would bring perfection and we are most grateful to His Lordship!

Pre-Trial Diversion from Criminal Proceedings: The Need for Legal Frameworks in...