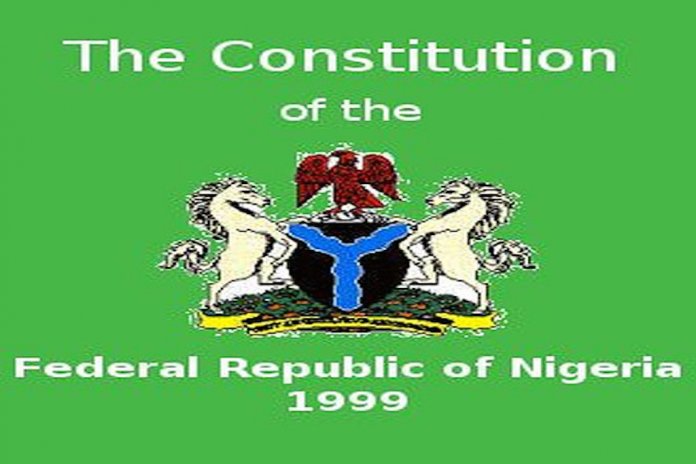 The two chambers of the National Assembly are poised to pass the bill for the alteration of 1999 Constitution as altered before proceeding on annual break in July.

Towards the early passage of the bill, the National Assembly committees working on the bill will conclude their assignments and present the bill for clause-by-clause consideration before the lawmakers proceed on annual recess in July.

Already, the constitution review committees of both the Senate and House of Representatives are collating reports from the zonal public hearings held last month across the six geo-political zones.

The Senate Ad-hoc Committee on Constitution Review, headed by the Deputy President of the Senate, Senator Ovie Omo-Agege, and that of the House of Representatives, headed by Deputy Speaker, Hon. Idris Wase, had in May held public hearings in 12 cities, at the rate of two per each of the six geo-political zones.

THISDAY findings revealed that the outcome of the zonal public hearings are to be put together by the committee members with the assistance of consultants engaged for the exercise.

A senator from the North-central geo-political zone and member of the Constitution Review Committee told THISDAY on condition of anonymity that the collation of the aggregate views at the zonal hearings will be worked on at a retreat to be held shortly for the committee members to take a holistic look at the presentations at the public hearings before putting them together into a draft bill for presentation to the federal lawmakers by July.

He said: “Our committee, which is also in liaison with the House committee, will any time from now go into a retreat to look at all the submissions at the public hearings and put them in a draft form for the Senate to consider and ensure clause-by-clause consideration before going on recess next month.”

He listed 16 thematic areas, which will be the guide of the committee while preparing its report to include gender equality for women and girls, federal structure and power devolution, local government and its autonomy, public revenue, fiscal federalism and revenue allocation, Nigerian police and Nigerian security architecture as well as comprehensive judicial reforms, electoral reforms and socio-economic and cultural rights as contained in Chapter 2 of the constitution.

He listed other areas as strengthening the independence of oversight institutions and agencies created by the constitution or pursuant to an act of the National Assembly, residency and indigene provisions, immunity, National Assembly and state and local government creation, FCT administration, the legislature and legislative bureaucracy and constitutional role for traditional rulers.

He expressed optimism that the bill will be ready for clause-by-clause consideration by the Senate at plenary before proceeding on its annual vacation in July.

The senator also stated that after the clause-by-clause consideration by the Senate and harmonisation with the House of Representatives, all those clauses that get through will be sent to the 36 state Houses of Assembly for consideration and approval.

He said: “Once we scale that hurdle, the bill will now be properly vetted to confirm the clauses that made the threshold after which it will be sent to the executive for assent.”
According to him, the current constitution amendment process will see the light of the day as both the executive and the state governments are being carried along in all the moves by the legislative arm to further amend the constitution.

He said: “Let us keep hope alive that the process of amending the constitution, which is now at its peak, will turn out well as I know that the leadership of the two chambers of the National Assembly is carrying along the executive arm as well as the state on what we are doing to further amend the 1999 Constitution.”