Home News New Service Chiefs: We Are Operating In An Atmosphere Of Impunity –... 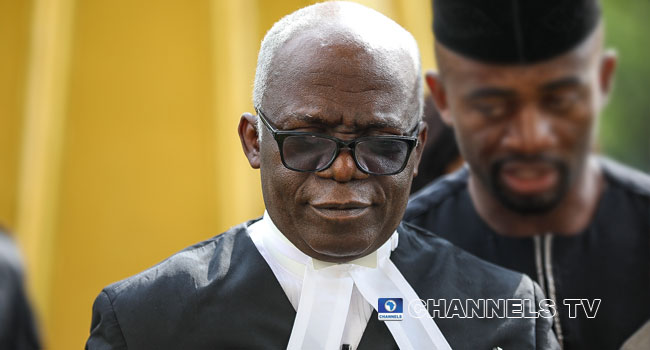 Human Rights Lawyer, Mr. Femi Falana (SAN), says the nation has continued in its habit of operating under an atmosphere of impunity.

Speaking on the appointment of the new Service Chiefs, Mr. Falana said going on to appoint the new leaders of the Armed Forces without the confirmation by the two chambers of the National Assembly, constitutes a disregard for the rule of law.

Mr. Falana who was a guest on Channels Television Sunrise Daily said the provisions within section 218 of the constitution empower the National Assembly to approve the appointment of the Service Chiefs.

According to the rights lawyer, the new service chiefs have only been nominated by the president and are awaiting confirmation by the legislators.

Falana was of the opinion that the whole essence of a presidential system of government is to ensure that there are checks and balances.

“Section 18 of the Armed Forces Act makes provision for both chambers of the National Assembly to approve the appointments of Service Chiefs.

“These laws were interpreted in the case of Festus Keyamo versus the President of Nigeria and the decision was rendered in 2018 by retired Justice Adamu Bello.

“The government did not appeal that judgment, in that case, the court held that by the combined effect of section 218 of the constitution and section 18 of the Armed Forces Act, the National Assembly shall approve or confirm the appointment of Service Chiefs.”

According to the Senior Advocate, these laws have not been obeyed in the latest appointment of Service Chiefs by the president.

President Buhari on Wednesday accepted the immediate resignation of the former leaders of the armed forces and appointed new officers as replacements.

The replacement of the Service Chiefs came after numerous calls for their sack over the increasing insecurity in the country.

But despite debates over the reason behind the replacement, the Presidency has maintained that it was considered the best decision for the country at the moment.

President Buhari appreciated the outgoing Service Chiefs for what he calls their “overwhelming achievements in our efforts at bringing enduring peace to our dear country,” wishing them well in their future endeavours.

Institute of Chartered Secretaries Call for Application for Direct Membership