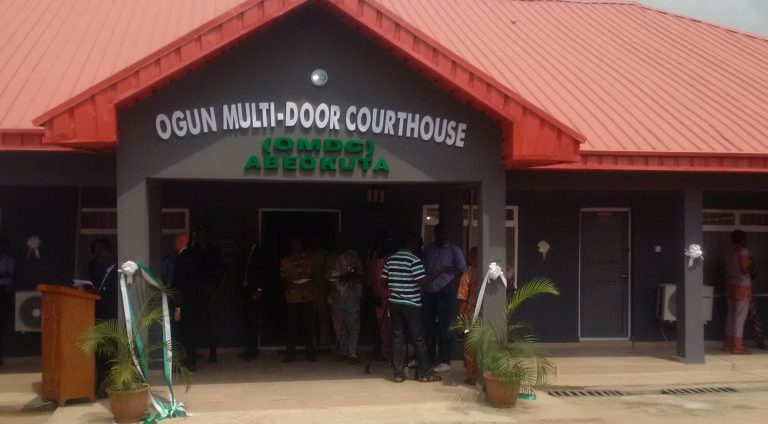 No fewer than 920 cases have been filed in the Ogun Multi-Door Courthouse Court as at the end of February, 2021 out of which 523 cases have been resolved and settled since inception in 2017.

The Ogun State Governor, Prince Dapo Abiodun, who revealed this on Wednesday,
at the inauguration of the Governing Council of the Ogun Multi-Door Courthouse said his administration would continue to strengthen the capacity of the judiciary so that the people will have fair dispensation of justice, irrespective of age, gender, religion, geographical location or political affiliation.

Abiodun noted that efficient and effective administration of justice remains an important pillar of access to justice and by extension, a key indicator towards the Ease of Doing Business in any society, declared that the current administration in the state would continue to espouse policies in order to make Ogun remain the safest place to work, live and do business in Nigeria.

Represented by his Deputy, Noimot Salako-Oyedele, Abiodun explained that the Multi-Door Courthouse, as part of the public justice system has been emplaced to enhance access to justice by providing alternative mechanisms to supplement and complement litigation in the resolution of disputes across the state.

He noted that Ogun State Judiciary was among the first set of states to comply with the directive of the National Judicial Policy to adopt the Alternative Dispute Resolution (ADR) mechanism in the Court System.

The governor added that Ogun is the only state in the country with multiple Multi-Door Courthouses which were constructed by the indigenes of the respective communities in which they are sited without the input of government.

He said since OMDC was first launched on 13th February, 2017, three Multi-Door Courthouses in Ijebu Ode, Sagamu and Ota had been inaugurated in 2018, 2019 and 2021 respectively.

The governor stressed that inauguration of the Governing Council is another symbolic demonstration of his government’s commitment to the principle of inclusiveness in governance, which he pointed out “gives more of our people the opportunity to contribute to the process of governance and give them a voice in matters that concerns them, especially as governance is all about the people”.

Noting that Ogun State has been in the forefront of the Judicial System in Nigeria over the years, Abiodun disclosed that “since inception of the Courthouses,

He stated further that workings of the Multi-Door Court Houses will be governed by the Multi-Door Courthouse Law of Ogun State, 2020, signed into law on the 27th of August, 2020, saying “pursuant to section 7 of this Law, the Courthouses will be under the supervision of the Governing Council which will also work under the directives of the Honourable Chief Judge of Ogun State”.

The governor emphasised that the inauguration of the Governing Council of Ogun State Multi-Door Courthouse is another symbolic demonstration of his administration’s commitment to further strengthen the judiciary as a stakeholder in the successful implementation of ‘Building our Future Together Agenda’.

Abiodun, however, charged the members of the new Governing Council headed by Justice S.A. Olugbemi, to bring to the fore their innovative and adaptive capabilities.

He informed them that the Council was coming in at a crucial period in the developmental history of the Multi-Door Courthouse as an integral of the judicial system and administration.

“I charge you to appreciate the enormity of this assignment. You are expected to bring to the fore, more than before, your innovative and adaptive capabilities. In fact, we expect you to make strong bricks without straw. You must think outside the box and even without a box. Therefore, there is need to be more focused, mentally alert and courageous. I am convinced that you are all equal to the task. You have all been chosen, largely on your towering credentials and individual merits.

“But, it is also important that we remind ourselves that you have been selected from among a wide pool of equally qualified and competent people of which Ogun State is abundantly blessed. You must, therefore, abide to the oath of office and justify the confidence reposed in you by the State government and the good people of our dear state.

“At this point, let me restate our administration’s commitment to a society that is free, fair, just and ensures obedience to the rule of law. This guarantees that all the people of Ogun State will have opportunity to individual prosperity. We will continue to strengthen the capacity of the States’ Judiciary so that our people will have fair dispensation of justice, irrespective of their age, gender, religion, geographical location or political affiliation. We are committed to an adjudicatory process that is not only quick without constituting a financial burden to the litigants, but also one that ensures that Justice is served.

“Let me reassure our people that the Ogun Multi-Door Court House (OMDC) will continue to ensure a hitch-free dispensation of justice along this broad spectrum of conflict resolution, conciliation and mediation. In like manner, we will continue to come up with policies and innovations that will continue to strengthen our state’s judiciary”. Abiodun submitted.

He listed the Ogun State Civil Justice Transformation Lab Draft Strategy, the establishment of the Small Claims Court, the establishment of the Ogun State Public Interest Law Partnership (OPILP), Police Duty Solicitor Scheme (PDSS), and Violence Against Persons Management Committee (VAPMC) as initiatives put in place by his administration to enhance justice administration and delivery in the state.