It was an unexpected end for Mr Farouk Lawan on Tuesday when he appeared before Justice Angela Otaluka of the High Court of the Federal Capital Territory (FCT), Abuja.

Lawan, a former chairman of the House of Representatives ad-hoc committee on fuel subsidy, was accused of soliciting a $3 million bribe from Femi Otedola while probing the multi-billion naira fuel subsidy fraud in 2012.

The bribe was to remove Otedola’s then company Zenon Petroleum and Gas Limited from the list of oil companies allegedly involved in the scam.

Although the former lawmaker had been walking freely while awaiting the court to determine his fate in the bribery charges filed against him, he is expected to spend the night in jail after he was found guilty of the counts.

In the first count, he was said to have corruptly asked Otedola for a bribe of $3 million as an inducement to remove the name of his company from the report of the House of Representatives Ad-Hoc Committee on Monitoring of fuel subsidy regime.

Count two also stated that Lawn collected the sum of $500,000 as a bribe to exonerate Zelon Petroleum and Gas from the fuel subsidy probe report.

The Long Journey To Justice

Following a long journey to justice for Lawan who has been standing trial since 2013, Justice Otaluka finally sentenced him to seven years in prison.

He was found guilty of counts one, two, and three which bothered on corruptly asking for bribe and obtaining same from Otedola.

The presiding judge stated that the evidence listed and submitted before the court by the prosecution counsel remained unshaken during cross-examination.

She added that the conduct, responses, and submissions of the defendant and witnesses established the charge in the first count, while the defendant demanded a balance after receiving the first and second tranche of the payment. 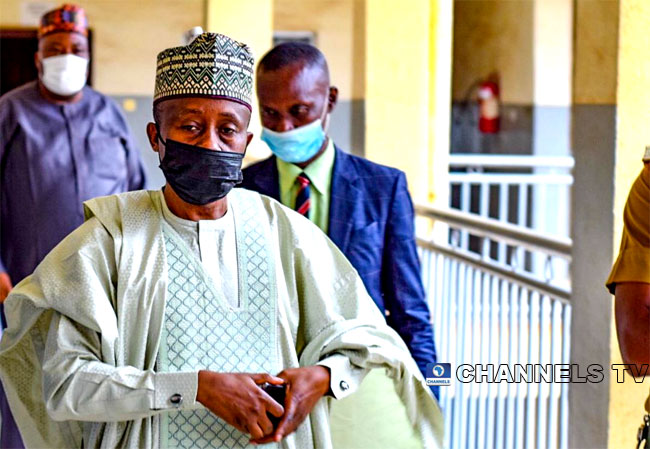 As of the early hours of April 24, 2012, when Lawan received the second tranche, according to Justice Otaluka, no complaint was made to any security agency or anti-corruption agencies as he claimed he took the money to show as evidence before the House.

She affirmed that the former lawmaker failed to convince the court that his acceptance of the said bribe was to serve as evidence before the House that Otedola intended to bribe the committee.

In her judgement, the judge sentenced Lawan to seven years in prison on counts one and two, while he got five years on count three.

She said the sentences were to run concurrently and ordered the former lawmaker to return $500,000 to the Federal Government.

After the judgement, Lawan was driven out of the court premises in a Toyota Hilux van owned by the Nigerian Correctional Service.

In this photo taken on June 22, 2021, Mr Farouk Lawan is driven out of the court by officials of the Nigerian Correctional Service.