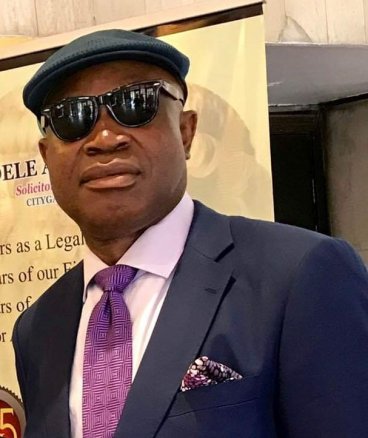 While a hybrid birthday ceremony is to be held today at 3 pm at the Nigerian Law School, Lagos to mark the anniversary, the highlight of the event is the launch of the “Nigerian Law School Support Initiative,” a project specifically requested by Ngige to revamp the decaying infrastructure at the Law School.

A Thanksgiving Mass is scheduled for today at 11 am at St. Dominic’s Catholic Church, Yaba, Lagos. Also, an Anniversary Lecture on “The Nigerian Law School, infrastructure and the future of law: Stakeholders as catalysts for development” will be delivered by Prof. Gbolahan Elias SAN. The lecture will herald the unveiling of the support initiative. While the Justice Chief Justice of Nigeria, Justice Ibrahim Tanko Muhammad is the Special Guest of Honour, the Leader of the Nigerian Law School Class of 1985, Prince Lateef Fagbemi SAN is the Chairman of the Occasion.

Former Chairman of the Body of Benchers, Chief George Uwechue SAN is the Father of the Day while the Guests of Honour include the Attorney-General & Minister of Justice, Mr. Abubakar Malami; Chairman of Air Peace Airlines, Mr. Allen Onyema, and Managing Director/CEO of Fidelity Bank Plc, Mrs. Nneka Onyeali-Ikpe. The Chief Host is Prof. Isa Hayatu Chiroma SAN, Director-General of the Nigerian Law School.

In a statement by his Senior Special Adviser on Media and Publicity, Garba Shehu, President Buhari said he is “rejoicing with family and friends on the milestone” recorded by Ngige.

The statement adds: “The President notes, with commendation, contributions of the legal luminary to the study and practice of law in Nigeria, donating books and materials to Law Schools, and serving on National Executive of NBA for more than 25 years, during which he represented the association as a member of the Body of Benchers.

“President Buhari affirms that Chief Ngige played a significant role in ensuring fairness and justice for the state and citizens by accepting to join the team of private legal professionals that prosecuted cases at the Failed Banks Tribunal, and other significant cases for the Federal Government, largely related to recovery of public funds and property.

“As the lawyer, who holds the chieftaincy title of “Ikemba N’Alor” turns 60, the President congratulates him for many achievements that have attracted recognitions and awards for diligence over many years of service.

“President Buhari joins family members of Chief Ngige, his friends and all well-wishers in praying for longer life, good health and strength to continue in good works.”

In his goodwill message, Justice Muhammad described Ngige as a “legal icon and quintessential philanthropist,” adding that he is a “man of honour and dignity” whose lifestyle “has been a formidable fountain of inspiration to people from all walks of life.”

His words: “A life of scholarship. A life of commitment to the development of his fatherland. A life of service to humanity. A life of absolute submission to the dictates of the almighty God and his conscience. Those are the exceptional attributes that aptly epitomise the 60-year voyage of this legal icon and quintessential philanthropist at whose instance we are all gathered here today.”

Said Justice Muhammad: “My friend and learned colleague, Chief Emeka Ngige, SAN, who is currently the Chairman of the Council of Legal Education, is a man of honour and dignity. His lifestyle has been a formidable fountain of inspiration to people from all walks of life. He is a man who briskly deploys wisdom and unassailable intellectual strength whenever he is confronted with herculean challenges. Interestingly, to the best of my knowledge, he has never faltered in any task assigned to him, especially in the enviable position he currently holds in the Council of Legal Education.

“The legal luminary whose 60th birthday we are celebrating today has accomplished so much in life within the short time he has so far spent. He has become a strong tower and a paragon of intellectual prowess that the younger generation of lawyers from Nigeria and beyond could conveniently draw inspiration and strength.

“His profundity and dexterity are pointedly a vehement salute to industry and excellence which ultimately culminated in the giant strides he has recorded within and outside the shores of Nigeria. To the expansive clan of his admirers, Chief Ngige, SAN is a dogged promoter of equity and fairness; and evidently an outstanding combatant in the campaign against injustice. He is a man that is richly endowed with immense savvy and graciously blessed with inimitable creative acumen which he generously engages in his daily social intercourse. His intellectual accomplishments have tremendously crystallized the legal profession by erecting virile pillars of knowledge and confidence in the minds of both legal practitioners and law students.”

On his part, Governor Akeredolu, a former President of the Nigerian Bar Association (NBA), said: “My great brother and learned friend in the life of Mortals, commemoration of the day of first contact with the Earthly plane comes once in a yearly calendar.

“As you celebrate your 60th Birthday today, I heartily wish you a very happy birthday and prayers for scores of healthy, prosperous and peaceful returns of the day. May you have all the joy your heart can hold, all the smiles a day can bring, all the Blessings a life can unfold.
“CONGRATULATIONS. All honour, glory and adoration belong to the Lord for seeing you to this age. As we say in Yoruba, Asodunmodun, àsosùmòsù, igba odun odun kan. More grace.”

In his congratulatory letter dated July 2, 2021, the Mr. Boss Mustapha said: “This occasion indeed requires giving thanks and adoration to the Most High for bestowing His favours and mercies upon you.

“Additionally, I wish to attest to the fact you have contributed much to humanity both publicly and privately over the years. This is evidenced in the number of high profile cases you have handled and won convincingly while maintaining humanity and integrity. You are indeed a blessing not just to the legal profession but to the nation. For these and much more, we are grateful to God for witnessing this great day in good health.”

On his part, Malami said: “Your birthday calls for the celebration of your life and the remarkable achievements you have recorded over the years. As a thorough-bred legal practitioner with a track record of professional excellence, your invaluable contributions towards the progress of our noble profession over the years have not gone unnoticed hence the various appointments both in the legal profession and other bodies.

“Indeed, you have distinguished yourself as a renowned, selfless, industrious and committed lawyer whose foray into the legal profession has benefitted our dear nation tremendously.

“While wishing you continuous success in all your future endeavours, it is my prayer that Almighty God will preserve you for many more years and in good health so that the legal profession and the nation in general will continue to benefit from your wealth of experience.”