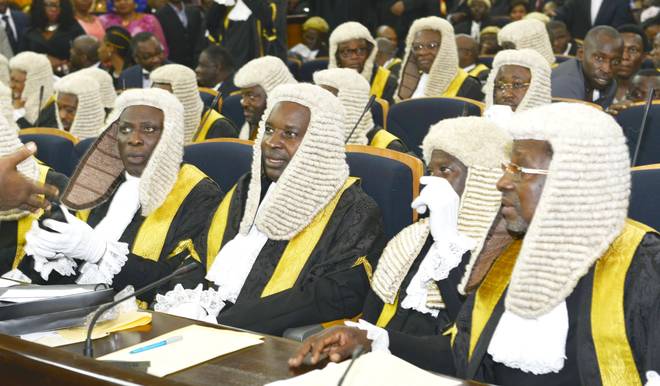 SUNDAY EJIKE writes on the concern trailing the award of the SAN title, particularly how the issue of privileges is defined.

For the fifth time in about ten years, the guidelines for the conferment of the rank of Senior Advocate of Nigeria (SAN) are to be reviewed again and the amended rules would be used in selecting successful candidates in 2023. Secretary to the conferring authority, the Legal Practitioners Privileges Committee (LPPC) and Acting Chief Registrar of the Supreme Court, Hajo Sarki-Bello in a press statement in October, disclosed that the chairman of LPPC and Chief Justice of Nigeria, Ibrahim Tanko Muhammad, had set up a sub-committee to handle the review exercise.

In the statement, also announcing the 72 lawyers appointed to the new rank and sworn-in on December 8, 2021, she said, “The application for the 2022 exercise would open in January. In the meantime, the Legal Practitioners Privileges Committee wishes to notify the general public that it has set up a sub-committee to review the 2018 guidelines for the award of the rank effective from 2023 award year.”

The latest reform move by the leadership of LPPC may not be unconnected with the strident criticism of the award process by the influential Body of Senior Advocates of Nigeria (BOSAN), which has, interestingly, emerged as the most vocal critic of the LPPC and the Chief Justice, in recent time.

It will be recalled that BOSAN had expressed worry over the huge number of applicants recently shortlisted for the award, warning that unless a holistic review of the process is undertaken by the LPPC, the rank stands the risk of losing its prestige and standing among stakeholders.

“However, following the recent announcement of the shortlisting of 130 candidates shortlisted in the process for conferment with the rank of Senior Advocates of Nigeria, we are of the considered opinion that the concerns raised in our earlier referenced letter have not been addressed,” the body of Senior Advocates lamented.

BOSAN said it was gratifying that its earlier compliant received an acknowledgement from the LPPC but couldn’t contain its indignation with the way things eventually turned out again this year.

Noting self as a dominant stakeholder, BOSAN expressed readiness to support the reform process in any way possible, asking that LPPC “should re-evaluate the criteria, guidelines and administrative processes leading to the selection, including the personnel at the SAN/LPPC Administrative Secretariat/Department, proper pre-screening of applicants, competitive processes and independent assessment free of lobbying, all geared towards attaining and sustaining continuous improvements and retaining the dignity, respect and reverence of the prestigious rank of Senior Advocate of Nigeria and the legal profession in general.”

The position of BOSAN is seen in many quarters as a major indictment for the process of the award of the title, though Justice Muhammad brushed aside the objection and criticism to eventually confer the title on 72 lawyers, sustaining the same “huge” number of last year.

As of 2019, Nigeria had just 526 senior advocates with the first two being late Chief Rotimi Williams and Dr. Nabo Graham Douglas who were conferred with the title on April 3, 1975. That would mean 526 awardees in 44 years. But the LPPC under Justice Tanko, in two years, has shot the number to 670, adding 144 new Inner Bar members, in just two exercises.

BOSAN’s concern, like many other stakeholders in the justice sector, is that the Inner Bar is gradually becoming an all-comers’ affair with the “huge” numbers being yearly approved for the Silk, particularly under the current administration. Those on the other side are however pointing at the huge differential between the number of lawyers in the past and now, which currently stands at 197,015 lawyers, including the 4,350 new entrants that were called to the Bar in March this year.

As BOSAN and LPPC continue to engage over the process of the award, findings by Nigerian Tribune showed that beyond the “huge” number of awardees, there are other administrative and procedural issues plaguing the exercise.

A lawyer with a minimum of ten years of post-call experience and considered to have achieved distinction in the legal profession is qualified for the award by the letters of the extant guidelines. But the final consideration is purely a matter of privilege and that is the point fraying the nerves of many.

Pursuant to this provision, checks by Nigerian Tribune showed that the LPPC has over the years enacted at least four guidelines for the conferment of the rank. The first one was done in 2011, then 2013, 2016 and the latest in 2018.

Being a privilege and not a right, legal practitioners put in lots of effort to be conferred with the SAN rank, which is the peak in the legal profession. In preparation for it, lawyers renovate and upgrade their chambers to meet up with the requirements of the LPPC.

Lawyers, while warming up for the title, also render pro bono services (free legal services) to indigent clients and also pursue their cases up to the Supreme Court as parts of the requirement that would enable them enjoy the privilege.

Nigerian Tribune, however, gathered that some justices of the apex court most times delay the dates for hearing and determination of cases of lawyers pursuing the SAN title before them. Because that requirement could not be met, a number of lawyers missed the award this year.

Some lawyers, with over 15 years post-call, who have been applying for the rank of SAN, are in yearly lamentation. For the appointment of the SAN rank, the application is to be considered without regards to the ethnic origin, pedigree, physical disability, marital status, age, religious beliefs, political views, or affiliations as provided in Section 2(b) of the Act. Rather the evaluation of the applicant’s competence will be based on his integrity, opinion of judges, general knowledge of the law, contribution to the development of law, leadership qualities, strength and quality of reference received by the applicant, etc, as stated in Section 16(2) of the Act.

ALSO READ   NBA 2018 Election - Would Our Votes be Safe at the Backend?

The applicant must also be a legal practitioner called to the Bar and practicing in Nigeria as an advocate and must have been in active legal practice for at least ten years immediately preceding the date of application as provided by Section 18 of the Act.

Every interested applicant is required to pay a non-refundable processing fee of an amount that the LPPC may direct to be paid as provided by Section 9(3) of the Act.

Equally, there must be evidence of current active practice. The application form shall also require the applicant to provide a list of at least ten judges of superior courts before who the applicant had appeared in contested cases of significance and who can confidentially vouch for the applicant’s professional competence as provided by Section 13 of the Act.

Also, the applicant will be required to submit a list of six legal practitioners whom he led against or who they led in contested cases of significance. Three of the lawyers will be selected by the LPPC to give a detailed written confidential reference about the applicant as provided by Section 13(2) of the Act. There must be evidence of contribution to legal development through case law and publications.

The applicant, again, must have a standard law office as the LPPC has the duty to conduct a physical inspection of the applicant’s firm at the final stage for the purpose of assessing the level and quality of his facilities such as a library, competent staff, quality of office space, books of account, junior staff or partners in the chamber and other required facilities in the firm as stated in Section 15 of the Act.

There must be evidence of payment of his bar practicing fee and membership dues to his branch of the Nigerian Bar Association (NBA) for at least 10 years before the application as well as evidence of pro bono legal services he has rendered to indigent clients, that is, public interest litigation as a form of community service.

In the same vein, the applicant is expected to show evidence of payment of income tax for at least three years preceding the application, and must demonstrate leadership qualities and loyalty to the profession in Nigeria.

An appointed SAN has the exclusive right to sit in the inner bar of the court and has the right to mention any motion in which he is appearing or any other cause or matter for mention out of turn. He has the right to wear a silk gown and gets his case called before lawyers in the Outer Bar.

However, the rank can be withdrawn at any time by the LPPC if the following conditions stated in Section 22 occur;

The SAN has been adjudged by the LPPC to have conducted himself in a manner incompatible with the dignity and honor of the rank.
The SAN is found guilty of professional misconduct by the LPPC.
The appointed SAN is convicted by a court of law for any offense which in the opinion of the LPPC is incompatible with the honour and dignity of the holder of the rank such as an offense relating to a breach of trust, theft, fraud, or dishonesty.
The guidelines further said the LPPC in the exercise of its disciplinary jurisdiction shall have the power to withdrawal the rank, suspend it, for a period of time not less than six months, issue a letter of reprimand, as well as direct payment of costs and restitution.

Some lawyers are however contending that by the virtue of Section 10 of the Legal Practitioner Act (LPA), only the Legal Practitioners Disciplinary Committee (LPDC) is competent “to consider and determine any case where it is alleged that a person whose name is on the roll has misbehaved in his capacity as a legal practitioner or should, for any other reason, be subject of proceedings under this Act.”

The LPDC in itself comprises 49 members – made up of the Attorney-General of the Federation as the chairman, the Attorneys-General of the 36 States of the Federation and 12 legal practitioners of not less than ten years’ standing, appointed by the Body of Benchers on the nomination of the Nigerian Bar Association, going by Section 10(2) of the LPA.

A lawyer, Abubakar Sani, said the provisions of Section 10(1) of the LPA are explicit and unambiguous, that the LPDC possesses the exclusive power of sanction over all lawyers, irrespective of title.

The Position of Nigeria’s Cyber Laws on Cyberbullying, Cyberstalking, Cybersquatting and...