Home Opinions Twitter Suspension: A Brazen Attack on the Freedom of Expression in a... On 4th June 2021, the Federal Government of Nigeria put an indefinite ban on the operations of the microblogging and social networking service, Twitter in Nigeria. The suspension came two days after the popular media site deleted a tweet by the President of Nigeria that threatened to punish regional Secessionists.

The Tweet made by the President reads: “Many of those misbehaving today are too young to be aware of the destruction and loss of lives that occurred during the Nigeria civil war. Those of us in the fields for 30 months, who went through the war, will treat them in the language they understand.”

Also, the President’s Twitter account had re-tweeted a video along with the quote, “I receive daily security reports on the attacks on critical national infrastructures, and it is very clear that those behind them want the administration to fail. Whoever wants the destruction of the system will soon have the shock of their lives. We have given them enough time…. We will treat them in the language they understand.’’

The Federal Government accused the American Social Media Company of allowing its platform to be used for activities capable of undermining Nigeria’s cooperate existence.  Shortly thereafter, acting on the President’s instruction, the Nigerian Communication Commission (NCC) ordered the Association of Licensed Telecoms Operators of Nigeria (ALTON) to suspend access to Twitter in Nigeria.

In reaction to the President’s injunction, there has been a public outcry and condemnation of what is now popularly called the “Twitter ban” by Nigerians, especially by those who fall into the youth demography. This is due to the fact that many young people depend on Twitter to not only express their frustrations with the government, but as a marketing tool for their businesses in order to make ends meet, owing to the high rate of unemployment in the country. Since the ban took effect, access to Twitter has become impossible and so a lot of youth have resorted to using VPN Applications to circumvent access to Twitter through Nigeria, in order to connect to the Twitter platform. However, this is not sufficient due to the attendant issues of tweeting from countries outside of Nigeria.

The following pressing questions which have necessitated the writing of this article are:

IS THERE ANY LAW THAT EMPOWERS THE FEDERAL GOVERNMENT TO SUSPEND OR BAN ANY SOCIAL MEDIA PLATFORM IN NIGERIA?

Following a painstaking comprehensive research on existing laws in Nigeria and I have come to the conclusion that no law empowers the Federal Government to suspend or ban any social media platform in Nigeria. The Nigeria Communication Act, Cap N97, Laws of the Federation, 2004 is the principal legislation that governs telecommunication services, including internet service in Nigeria. Other Laws includes; the Nigeria Broadcasting Commission Act and the National Information Technology Development Agency Act, Cap N156, Laws of the Federation, 2004. None of these Laws or any Law in Nigeria empowers the President to suspend or ban Twitter operations in Nigeria.

ALSO READ   The Cleansing of the Judiciary

Tweets and similar social media declarations are not legal instruments and do not possess the power of law. As such, the declaration by the Federal Government of Nigeria through the office of the Minister of Information is, at best, a mere tweet that carries the same weight as every other tweet by other Nigerians without any legal backing. The Federal Government’s declaration on the suspension of Twitter is not an executive order, and it is not published in a Federal Gazette.

Some may argue that the declaration by the President suspending the operation of Twitter activities amounts to an executive order.  However, it must be borne in mind that an executive order is an order or regulation issued by the President or some administrative authority under his direction to interpret, implement, or give administrative effect to the provision of the Constitution or of some Treaty. It is indeed an effective instrument for good governance and administration by the government. See: Per George Will, J.C.A (pp.85-86 paras F) in Elephant Group PLC V. National Security Adviser (2018) LPELR-45528(CA).

Elijah Oluwatoyin Okebola and Abdulkarim A. Kana both of the Faculty of Law, Nassarawa State, gave a more robust view in their paper titled ‘’Executive Orders in Nigeria as valid Legislative Instruments and administrative Tools” published in the African Journal online website (www.ajol.info). The authors defined an executive order as a command directly given by the President to an executive agency, class of persons, or body under the executive arm. Such a command is in furtherance of government policy or the Act of the Legislature.

Can we, therefore, say that the declaration of the Federal Government of Nigeria placing an indefinite suspension on Twitter is invalid in law in that it was not made within the boundaries of the President’s constitutional or statutory authority? My answer would be in the affirmative.  In my opinion, an executive order will only be valid if it does not direct the performance of an act that violates the Constitution and the laws of the National Assembly. Relating this to the declaration made by the Federal Government of Nigeria on the 4th of June 2021 suspending Twitter operations in Nigeria, the declaration is in flagrant disregard to the provisions of Section 39 of the 1999 Constitution (as amended) as well Article 10, 19, 20, and 30 of the United Nation Universal Declaration on Human Right, 1948.

As pointed out by the Supreme Court in INEC v Musa (2003) LPELR-24927(SC), “all powers, legislative, executive and judiciary must be traced to the Constitution.” The powers of the President must flow from the Constitution.  Where the President’s action does not flow or is at variance with a part of the Constitution, such action could be said to be unconstitutional and invalid in law.  The suspension of Twitter by the Nigeria Government is therefore invalid since it is antithetical to the freedom of expression provided for by the 1999 Constitution of the Federal Republic of Nigeria.

It is generally accepted in law that any person(s) conferred with a function or duty may also take steps that are incidental or consequential upon the performance of that function.

Functionally, the Legislature or the Constitution may confer discretionary powers on the President to issue orders or directives in certain matters.  Such discretionary powers must always be exercised in a reasonable manner. Where the Legislature or the Constitution stipulates the manner in which an order or directive is to be carried out the President cannot deviate from the stipulated form. However, where there is no stipulated form, the order or directive may take any reasonable form. In Ojeh & Anor v. Mark & Ors (2015) LPELR- 25974 (CA), Per Peter Olabisi Ige, JCA (Pp 83-84 Paras D-A) stated thus:

“On the occurrence of any public emergency or in the interest of any public safety, the Commission may-(a) suspend the license of any licensee, take temporary control of any service or network facilities owned or provided by a licensee in any manner the Commission deems fit; (b) withdraw either totally or partially the use of any service or network facilities from any licensee, person or general public; (c) order that the Commission or class of Commission to or from any  licensee, person or the general public, relating to any specified subject shall not be communicated or shall be intercepted or detained; or that any such communication or its records shall  be disclosed to an authorized officer mentioned in the order, or (d) order the taking of possession of any customer equipment.”

DOES THE SUSPENSION OF TWITTER OPERATION IN NIGERIA ACT AS AN ANOMALY THAT IMPEDES THE FUNDAMENTAL RIGHT TO FREEDOM OF SPEECH OF NIGERIANS?

I find it particularly interesting that the President could suspend Twitter which is used by about 39 million Nigerians to express their views on global and national issues and carry out their businesses. There is no doubt that the suspension of Twitter by the Federal Government of Nigeria impedes the rights enshrined in Section 39 of the 1999 Constitution and Article 10, 19, 20 and 30 of the United Nation’s Universal Declaration on Human Rights 1948. Unduly restricting the ability of Nigerians to report, gather, and disseminate information has no place in democracy. The freedom of expression and access to information are foundational to a secure democratic state.

CAN THE FEDERAL GOVERNMENT PROSECUTE ANYONE WHO IS FOUND TO HAVE BREACHED THE COUNTRY’S BAN ON THE SOCIAL MEDIA FIRM, TWITTER?

Section 36 (12) of the 1999 Constitution enunciates that a person shall not be convicted of a criminal offence unless that offence is defined and the penalty therefore is prescribed in a written law.

The Attorney General of the Federation, Abubakar Malami, SAN, on the 5th June 2021, said the country would prosecute those who flout the government’s order to deactivate operations of Twitter in the Country.

Section 39 (1) of the 1999 Constitution provides that “every Nigerian shall be entitled to freedom of expression, including the freedom to hold opinions and to receive and impart ideas and information without interference.” Section 39(2) of the Constitution equally provides that “without prejudice to the generality of subsection (1) of this section, every person shall be entitled to own, establish and operate any medium for the dissemination of information, ideas, and opinions.” Article 19 of the United Nations Universal Declaration of Human rights, 1948 also provides that “every person has the right to freedom of opinion and expression; this right includes freedom to hold opinions without interference and to seek, receive, impart information and ideas through any social media and regardless of frontiers.” Article 9 of the African Charter on Human and People’s Rights 1986 provides that “every individual has the right to receive information and to express and disseminate his opinions within the law.”

There is a fundamental principle of law that says that everyone is allowed to speak or write what he likes, but one’s right of expression ends where the right of his neighbors or that of the public begins. Section 45(1) of the 1999 Constitution authorizes the State to impose absolute restrictions on individual freedom of expression in the interest of public safety, defense, and morals. Alternatively, the rights set out in the Constitution and the International covenant is not absolute.

The suspension of Twitter by the Federal Government of Nigeria has no place in a democratic society where the rule of law and respect for human rights norms is operational. The Federal Government should respect its citizens’ right to freedom of expression by reversing its decision to indefinitely suspend Twitter operations in Nigeria, and like Thurgood Marshall, former associate justice of the Supreme Court of the United States of America, would say: “Where you see wrong or inequality or injustice, speak out because it is your country. This is your democracy, make it. Protect it. Pass it on.” I would also implore all active Twitter users to speak up against the suspension of Twitter in Nigeria because it limits their fundamental right to freedom of speech. Nigeria shall be great again.

Matthew Israel is a legal counsel with Osita Aboloma and Associates, Utako, Abuja. He has interest in human right law and advocacy and corporate law practice. He may be reached on maisraelayo@gmail.com Let There Be Discipline in The Justice Sector 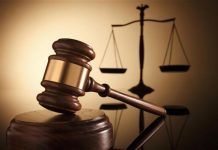 Agba Jalingo in Handcuffs: the Unlawful Beyond the Immoral – Jiti...