The World Bank has blacklisted 18 Nigerian individuals and companies in its efforts to strengthen institutions and fight against corruption in Nigeria. The blacklisting of these individuals and firms became necessary as they were found engaging in corrupt practices, fraud and collusive practices in its 2021 fiscal year.

This was disclosed by the global lender in a new report titled World Bank Group Sanctions System FY21.

It further stated that the debarments were made by the World Bank Sanctions Board, World Bank Chief Suspension and Debarment Officer and the African Development Bank (AfDB).

The debarments made by AfDB were recognised by the World Bank, making the affected firms to be barred under the cross-debarment policy.

World Bank Group’s David Malpass stated that the bank had granted over €156.67 billion to assist developing countries, as he emphasised the need for integrity and transparency standards in public finance.

“Since the beginning of the global pandemic, the World Bank Group has deployed more than €156.67 billion in critical assistance to developing countries. The crisis has required us to be rapid and innovative in mobilising this historic support.

“Yet, for these resources to have the needed development impact on the hundreds of millions of people who live in extreme poverty, we must ensure that resources are used efficiently, effectively, and for their intended purposes. And that means remaining vigilant to the scourge of corruption and ensuring that we promote the highest integrity and transparency standards in public finance,” Mr Malpass said.

He noted that some of the consequences of corruption could be devastating to people and their communities.

“The negative impacts of corruption on lives and livelihoods are well known. Corruption diverts scarce development dollars from the people who need them most and corrodes the systems and services that are integral for reducing extreme poverty,” Mr Malpass said.

2. Swansea Tools Resources Swansea Tools Resources was debarred for fraudulent practices for two years and 10 months. The World Bank based on Sanctions Case No 651 noted that the company misrepresented its past experience in its bid for a road maintenance contract under state employment. It added that as a mitigating factor, the SDO considered the respondent’s limited cooperation with investigators, noting that the respondent produced documents and agreed to be interviewed but did not accept responsibility for the misconduct.

3. Juckon Construction and Allied Services Nigeria Limited Juckon was debarred for corrupt practices for three years. According to the World Bank, the company made improper payments to a public official. The payment was made in connection with the award and/or execution of two waste management and refuse collection contracts under a state employment and expenditure project in Nigeria. It was debarred for a minimum of four years with conditional release.

5. Asbeco Nigeria Limited It was debarred for five years for corrupt practices. The matter also involved Glory and Unique Concept Enterprises was presented under Sanctions Case No 691 for submitting false documents in connection with two refuse collection disposal contracts under state employment and expenditure project in Nigeria. Also, the corporate respondent submitted a falsified income tax clearance certificate in its bids for the contracts. Both respondents were said to have submitted a falsified advance payment guarantee in connection with the execution of one of the contracts.

7. Salihu Tijani Although not included in the report, Tijani, who was recently debarred is a consultant for the National Social Safety Nets Project. He was debarred for 38 months for engaging in corrupt practices.

11. ALG Global Concept Nigeria Limited Debarred by the AfDB for three years under cross-debarment recognised by the World Bank 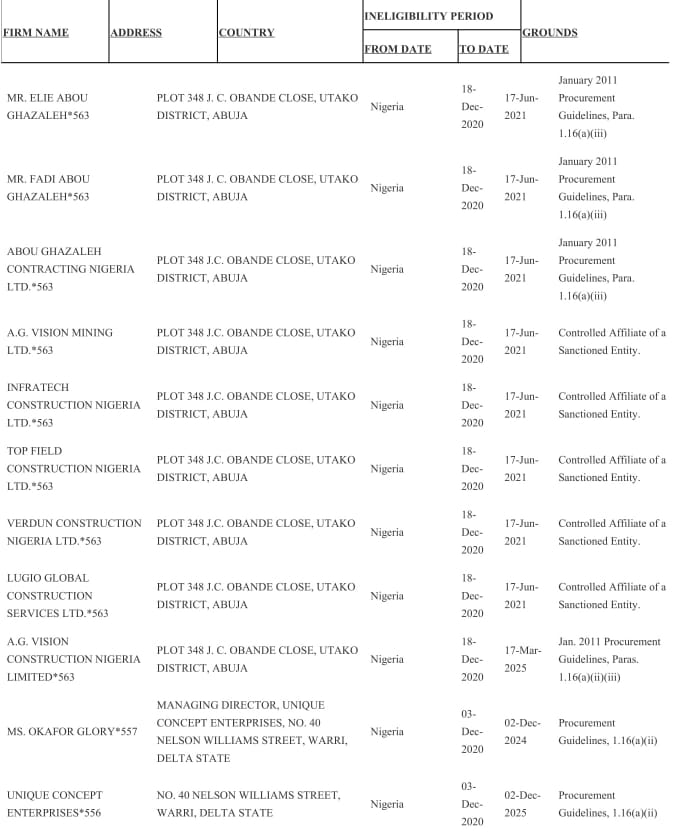