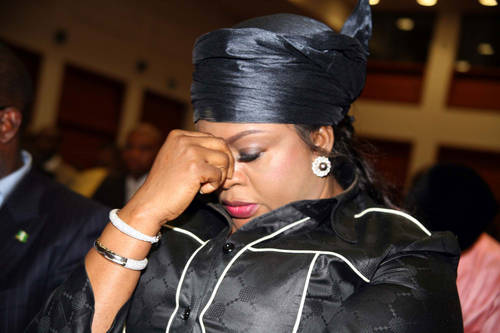 The federal government has lined up 32 witnesses as it expressed readiness to prosecute the former Minister of Aviation, Mrs Stella Oduah, and eight others accused of complicity in money laundering offences to the sum of N5 billion.

Justice Inyang Ekwo of the Abuja division of the Federal High Court has ordered an accelerated trial.

When the matter came up on Wednesday, the prosecution counsel, Dr Hassan Liman, SAN, informed the court that the Attorney General of the Federation (AGF) has given a directive for the prosecution of Oduah after the conclusion of an investigation.

Liman further informed the Court that 32 witnesses have been lined up to testify against the defendants.
Earlier attempts to arraign the defendants have been stalled following a letter from the Attorney-General of the Federation and Minister of Justice, Mr Abubakar Malami, SAN.

The prosecution counsel had previously notified the court that he received a letter from the office of the AGF in relation to the case.

According to Liman, Malami had in the letter dated May 6 disclosed that his office was still reviewing the facts of the case.

He urged the court to proceed with the trial, pending the outcome of the review by the AGF.

He lamented that no headway had been made in the case owing to a petition the defendants forwarded to the office of the AGF.

Liman argued that in line with section 396(1) and (2) of the Administration of Criminal Justice Act, ACJA, 2015, objection to challenge a charge could only be raised after a plea had been taken.

Counsel to the 7th and 8th defendants James Onoja, SAN, had informed the court about the existence of a petition to the office of the AGF accusing the prosecution agency, the Economic and Financial Crimes Commission (EFCC) of persecuting the defendants.

However, at the resumption of trial on Wednesday, the prosecution counsel, Dr Liman informed the court that the AGF has given his legal advice to the EFCC to prosecute the matter.

The defence counsel equally confirmed receipt of a copy of the AGF’s legal advice.

Oduah, who served as Aviation Minister from 2011 to 2014, and is currently a senator representing Anambra North, is facing a 25-count money laundering charge the EFCC preferred against her and eight others.

The EFCC alleged that the defendants conspired and laundered funds to the tune of about 7.9 billion.

EFCC, in the charge, alleged that Oduah and Odita who was identified as her aid and the Company Secretary to Sea Petroleum & Gas Company Ltd (SPGC), in February 2014, used their positions to transfer the sum of N1,629,250,000.00 from I-Sec Security Nig. Ltd account No. 2021756955 with First Bank Plc, to Global Offshore and Marine Ltd, account No. 2022977296 also domiciled with First Bank Plc, which money they reasonably ought to have known that it formed part of the proceeds of an unlawful act.

Oduah and Odita were accused of opening a naira “anonymous Private Banking Nominee Account No. 2024414450 with First Bank Plc and thereby committed an offence contrary to Section 11(1) of the Money Laundering (Prohibition) Act 2011 (As Amended) and punishable under Section 11(4) (a) of the same Act.”

They were, equally accused of opening a United State dollar “anonymous Private Banking Nominee account No. 2024414498 with First Bank Plc and thereby committed an offence contrary to Section 11(1) of the Money Laundering (Prohibition) Act 2011 (As Amended) and punishable under Section 1 1(4) (a) of the same Act.”