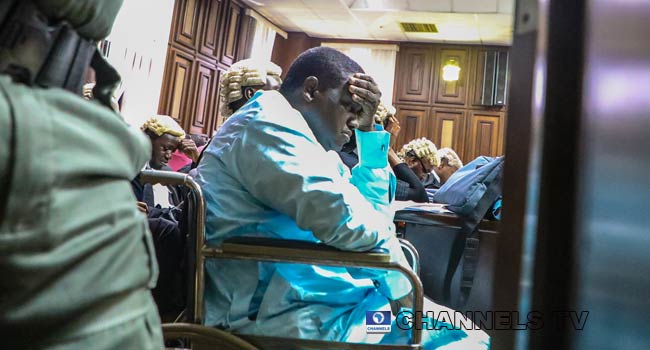 The Abuja Division of the Federal High Court has ordered the court’s deputy chief registrar to notify the attorney general of the federation, Abubakar Malami, of the pendency of Abdulrasheed Maina’s suit.

Justice Inyang Ekwo gave the order shortly after Mr Maina’s counsel, Ibrahim Idriss, informed that he had carried out the earlier court directive to effect service of processes on the respondents within three days of the order.

The judge, who ordered that hearing notices be issued on the respondents, adjourned the matter until October 28 for a hearing of the substantive matter.

Mr Maina is the former chairman of the defunct Pension Reform Task Team (PRTT), currently serving an eight-year jail term at Kuje Prison for pension fraud to the tune of N2 billion.

On October 17, in a motion ex-parte marked, FHC/ABJ/CS/1729/2022, dated and filed on September 27, he told the court that he was suffering from a life-threatening disease in prison and he needed urgent medical attention.

Mr Maina (the applicant) listed the interior minister and controller general of the Nigerian Correctional Services Centre as the first and second respondents, respectively.

Giving 10 grounds why the motion should be granted, Mr Maina said the failure to seek medical treatment for his ailment led to his incapacitation and health deterioration.

When the matter was called on Monday, Mr Maina’s lawyer was in court, but no counsel appeared for the interior minister or correctional centre’s controller general.

The senior lawyer then informed that in accordance with the court order made on October 17, the respondents were served with all the applications, including the originating motion.

He said despite effecting the service of processes, the respondents were not represented in court, and “the issue involved has to do with a life-threatening situation.”

The judge held that though he was going to adjourn the suit for the substantive matter to be heard on the next adjourned date, “I am also going to have the AGF notify even though they are not a necessary party.”

The judge, who adjourned the case until October 28 for hearing the substantive matter, directed that hearing notices be issued to the respondents.

“The deputy chief registrar of this court is hereby ordered to notify the AGF of the pendency of this suit,” he ruled. “This is the order of the court.”

Justice Okon Abang of the court had, on November 8, 2021, convicted and sentenced Mr Maina to eight years’ imprisonment for misappropriating N2 billion pension fund while serving as chairman of PRTT.