Mrs. Hannatu Dauda has been championing the cause of women and children across the country and particularly in Gombe State. She joggles between her legal practice, family and her passion as a right activist. She has utilized her experience working as a legal officer with NTA for several years to push for the protection of women and children through frontline media houses in the State. Working with international and local organizations, she has also taken the right awareness campaign to the grassroot.

On this day that she marks her birthday, Mrs. Hannatu Dauda shares her thoughts, and plans for the welfare of these vulnerable members of the society with DNL Legal and Style.

DNL L&S: You have always had the zeal to protect the rights of the vulnerable, how did it come about?

Mrs. Hannatu: I was brought up by my parents who were teachers and disciplinarians and who appreciate the importance of Education. Through their impact, I and my siblings never joked with education as we went to school with joy. On my part, I had the opportunity of attending primary school in remote villages where I saw very few girls out of many boys have the privilege of going to school. During break period, the school was always filled up with  girls hawking. Ironically, they do this to raise money for their family to use to  pay the school fees for their male children. Anytime you stop seeing a particular sales girl in school, it would certainly be that the parents have married her off and that ends her future. Within a twinkle of an eye, she starts child bearing and rearing and becomes dependent on the husband who would shoulder all responsibilities. If the husband is able to take care of his responsibilities, they are lucky, but in must cases the man becomes over burdened and the entire family suffers the attendant poverty.

Growing up, I also noticed that all the girls who had opportunity of going to school looked younger, cleaner and on the long run more financially stable than those who had no such opportunities. With this in mind, I began asking myself so many questions that I became so interested  in representing  woman. This spurred me to answering a call when there was a request for a woman to contest for the post of vice- chair Gombe state student’s Association ABU Zaria and my tribal student Union.  I got the seat by God’s grace. When I got married, I went to my husband’s village one day where I met some of my primary school classmates  who couldn’t further their Education. Honestly, it was hard recognizing some of them. Seeing them look very old and miserable because they had numerous need without hope of meeting those needs got me heart broken and the passion to put smiles on such faces grew within. This was how I delved into collaborating with so many NGOs to fight against gender based violence.  When I became a state counsel with the ministry of Justice, I began to prosecute numerous rape cases which has been rampant in the state and that confirmed to me that my passion for the rights of children and women will have no boundary until we all have equal opportunities for better tomorrow.

ALSO READ   NBA Under My Watch is Stronger - Usoro

DNL L&S: You said you worked with other groups to call for the elimination of GBV,  tell us more about this?

Mrs. Hannatu:  The movement began over 10 years ago, where I  went round the communities in Kaltungo and Balanga LGA, Gombe state,  facilitating programs on “Eliminating Gender Based Violence in Communities and A Way Forward” organized by the guidance and counseling development office Gombe. After that, I partnered with UNICEF  as  a facilitator on campaign on violence against children in Kwami LGA, Gombe state and also facilitated the international day of the Girl child in Bauchi, Abuja and Gombe. There I enlightened the students with the importance of Education and groomed them to campaign for their rights themselves. The most interesting was a three year program on ‘Eliminating Gender Based Violence’ in Gombe state Sponsored by UNFPA in collaboration with ministry of women affairs where we designed strategies to access justice. Referral pathway was created and placed in offices and strategic places to enable survivors of GBV access us for the protection of their rights. Finally, I visited students in boarding and day schools to create awareness on Rape, indecent dressing and need to stay in school and finish up to the university level.

DNL L&S: Do you wish to set up a platform through which such vulnerable persons can be reached?

Mrs. Hannatu: Oh yes by the grace of the Almighty God! That is my desire and when I am able to put so many things in place, you will be called to give it the needed publicity.

DNL L&S: How do you intend to ensure the success of this project?

Mrs. Hannatu: I will first ensure that I advocate for fair policies and laws that would protect the interests of  women, children and other vulnerable persons and coordinate civil society participation and facilitate popular participation and advocacy in protecting the concern, creating awareness in the challenges and cries of women. One thing I won’t forget to do is to provide educational opportunities for girls, and  work at all levels to help women overcome marginalization, violence and poverty. All these can be achieved with strong functional judicial system specifically designed to improve access to justice for all.

DNL L&S: Do you intend to work with a team?

Mrs. Hannatu: It is compulsory for me to work with a team because I need all the time to still prosecute my matters in court which is very important to me. I can initiate the project while a team manages it.

DNL L&S: It’s your birthday today, What do you have to say concerning the welfare of these  vulnerable persons especially to the entire Nigerian society and Government?

Mrs. Hannatu: I say to the society to join in the fight against this obnoxious malady Gender-based violence (GBV) is the most pervasive yet least visible human rights violation in the world. It includes physical, sexual, mental or economic harm inflicted on a person because of socially ascribed power imbalances between males and females. It also includes the threat of violence, coercion and deprivation of liberty, whether in public or private.

In all societies, women and girls have less power than men – over their bodies, decisions and resources. Social norms that condone men’s use of violence as a form of discipline and control reinforce gender inequality and perpetuate gender-based violence. Across the globe, women and girls – especially adolescents – face the greatest risk.

Also, survivors are often subjected to victim-blaming or ostracized from their families and communities due to social norms. This puts them at significant risk of poverty, isolation and further violence. Some survivors are forced to marry their perpetrators. Others face retaliation for reporting their experiences or seeking support – including at the hands of family members. At its worst, gender-based violence can result in death, it could be your daughter, your sister or your wife… Join me to protect and promote the rights of a child and a woman for a better tomorrow!

With regards to the government, I know that there are laws enacted to support the rights of women and children; the VAPP ACT,2015 ( Violence Against Persons Prohibition Act, ACJA Administration of Criminal Justice Act, the Child’s Right Act. These laws need to be domesticated and made to be very active. Girl child education should no longer be taken as one of those issues which are just on paper. We must all begin to think seriously and deeply too about the future of women and children in Nigeria if we want things to improve significantly.

DNL L&S: Thank you and happy birthday once again. 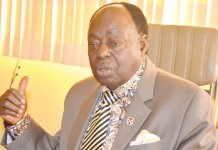 “What I Plan To Achieve At Kwara State University As Vice...