Home News Killers Of Unilorin Student To Die By Hanging 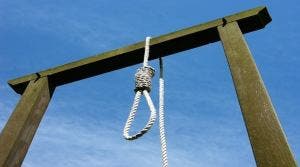 A Kwara State High Court, sitting in Ilorin has sentenced the killers of Olajide Blessing Omowumi, a 300-level student of the University of Ilorin to death by hanging.
The deceased, who would have turned 26 year old this year, was raped and murdered in a brutal manner by some of her assailants.
The trial judge, Justice Ibrahim Yusuf, convicted the suspects, AbdulAzeez Ismail and Ajala Moses Oluwatimileyin aka Jacklord.
They were convicted for the offences of culpable homicide and armed robbery, and sentenced to death by hanging.
Olayemi Timileyin Omogbolahan (3rd defendant) was convicted of rape and sentenced to life imprisonment.
The judge found AbdulKarim Shuaib (4th defendant) and Kareem Oshioyemi Rasheed (5th defendant) guilty of conspiracy to steal and stealing of money in the account of the deceased and accordingly sentenced them to three years imprisonment to run concurrently from the day of their arrest.
He discharged and acquitted Abdullateef AbdulRahman, David Bashir Adebayo and Akande Taiye Oladoja the 6th to 8th defendants, receivers of stolen items.
The judge said, “I direct you Abdulazeez Ismail, Ajala Oluwatimileyin and Oyeyemi Omogbolahan, should be hanged by the neck until you’re pronounced dead”.
He said the deceased was raped till death on June 2, 2021, at her guardian’s residence in Tanke area of Ilorin and a piece of paper was dropped on her chest with message containing: ‘No forgiveness for Unilorin student’.
According to the judgement, Ismail, Oluwatimileyin and Omogbolahan conspired among themselves to rob the deceased of her Samsung Galaxy A2 Core handset, one black Acer Aspire laptop, one Samsung drive, among several other items.
The killers were tried on 11 count charge bordering on murder, rape, armed robbery, illegal possession of firearms, among others.
(VON)
ALSO READ   Nnamdi Kanu’s Lawyer Pleads For FG's Pardon