An American judge who was caught using the N-word to describe a black burglar who tried breaking into her car has resigned and apologized for her comments.

Disgraced and suspended Lafayette judge Michelle Odinet stepped down from the bench Friday, saying the racial slurs she used to describe burglars outside her home were “hurtful words” and undermined the public’s confidence in the judicial system.

Odinet was captured on video using the n-word to describe men breaking into vehicles parked outside her home. She initially was mum on who used the language, but later acknowledged it was her.

The Louisiana Supreme Court had temporarily disqualified Odinet, at her request, two weeks ago and appointed a Black judge from Opelousas, Vanessa Harris, to handle cases in Division A of the Lafayette City Court, through Feb. 28.

The video drew worldwide attention. It was recorded as members of the Odinet family watched a home security recording of burglars in their driveway. At one point, a voice is heard saying, “And mom’s yelling n—–, n—–,” and a female voice answered: “We have a n—–, It’s a n—–, like a roach.”

Odinet’s lawyer, Dane Ciolino, confirmed to The Advocate that the judge had quit. Her resignation letter begged forgiveness.

Here is the full text of Odinet’s letter:

I take full responsibility for the hurtful words I used to describe the individual who burglarized the vehicles at my home. I am sorry for the pain that I have caused my community and ask for your forgiveness, as my words did not foster the public’s confidence and integrity for the judiciary.

After much reflection and prayer, and in order to facilitate healing within the community, I hereby resign as judge of the Lafayette City Court effective immediately. I am sending a copy of this letter to the Secretary of State and hope that a special election can be scheduled to fill the vacancy that my resignation creates. 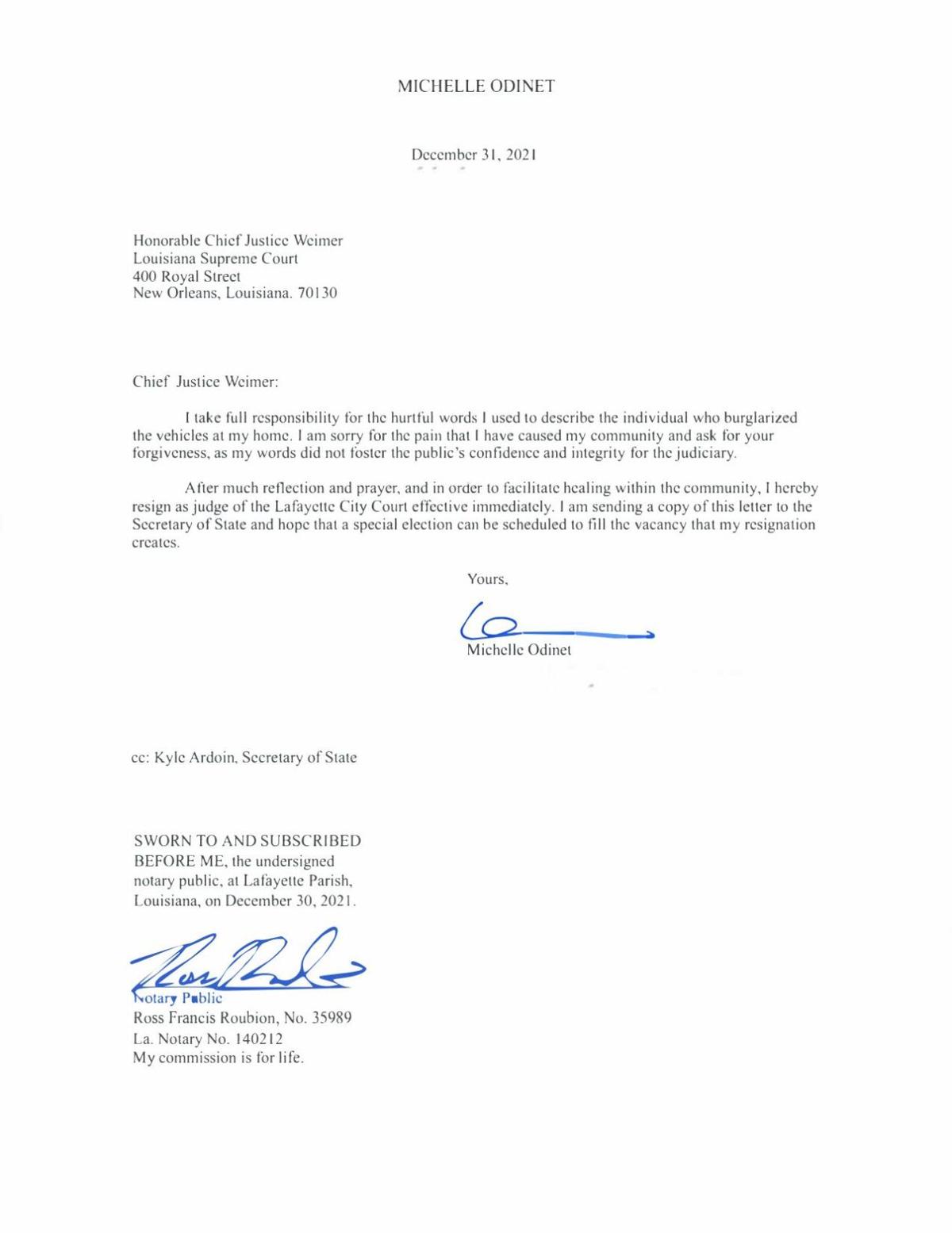 In a text message to The Advocate, Ciolino said “she understands that this is the end of her public service, but only the beginning of what she needs to do to earn the forgiveness of the community.”

More than 100 people filed complaints with the Louisiana Judiciary Commission after seeing the video. Even Saturday Night Live mentioned the judge after news of the slurs traveled worldwide.

“A judge in Louisiana took a leave of absence after she was caught on video using the N-word,” said a Black stand-up comedian, Michael Che, during the “Special Christmas Weekend Update” news segment of the show. “It’s the kind of story that makes me wonder, ‘Why are me and Keenen (Thompson, another Black actor who works for SNL) the only cast members here?’ You know what I’m saying.”

Louisiana Gov. John Edwards said Dec. 16 he believed Judge Michelle Odinet should resign, echoing a wave of calls for her resignation. State Sen. Gerald Boudreaux called the situation and the comments reprehensible, offensive and unacceptable from anyone serving as a judge.

Michael Toussaint, NAACP president, had also called for Odinet’s resignation and was pleased that she had stepped down.

“We are delighted to the fact she decided to go ahead and resign. The language she chose to use, speaking that way, described how she felt toward the African-Americans,” he said Friday. “She got caught showing that this is the heart of this individual.”

Toussaint also said that NAACP is going to call for an investigation on the cases that Michelle Odinet handled as a city judge. “She was sitting on the bench with that type of attitude. People of color have come before her and without knowing about her impartiality.”

“We are hoping we can get a judge on the bench that the people can trust and know that is not biased. We pray that the judge will give the people what they deserve,” he said.

The end came quickly. Odinet’s resignation letter arrived less than three weeks after the video was made. It was dated Friday but had been notarized Thursday, the day before the New Year’s holiday in most parts of the state.

Screenshots of Facebook posts from 2019 and 2020 suggested Odinet was trying to capture a person suspected of burglaries in her Bendel Gardens neighborhood.

“She’s been playing cowboy as if she is the law, and endangering everyone involved for years,” said a Lafayette resident who contacted The Advocate. “She was ready for the event in their driveway and all but instigated it.”

Odinet is the daughter of a Metairie attorney and a member of a sprawling family with deep roots in New Orleans society. A mother of two sets of twins, she is married to Kenneth Odinet Jr., currently the Lafayette Parish coroner. Law School Orders 21 Lawyers to Go Back to High School